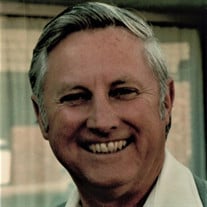 Jacob “Jake” Charles Lowe, 96, passed away Wednesday, June 26, 2019 at St. Luke’s Health & Rehabilitation in Carthage. Jake was born September 5, 1922 in Kent, IN to Garnett Lowe, Sr. and Ester E. “Kloepher” Lowe. He served in the United States Navy in the North Atlantic and the South Pacific as a chief electrician from 1939 to 1946. He resided in Carthage since 1950 and had worked as an independent advertising agent for Kashfinder Incorporated. Jake enjoyed hiking, backpacking, canoing, hunting, fishing and traveling . . . anything outdoors. He served on the Carthage City Council, the Carthage School Board; he was a member of the VFW, American Legion, Masons and Shriners. Jake was united in marriage to Martha Jane Lewman on January 9, 1945 in Louisville, KY; she survives. Jake is also survived by four daughters, Marilinda Porter of Granby, MO, Nancy McCarty of Ozark, MO, Tina Lowe of Springfield, MO and Sara Brown of Springfield, MO; one sister, Barbara Black of Jacksonville, FL; eleven grandchildren and 15 great grandchildren. Jake was preceded in death by two brothers and one sister. Memorial graveside services will be held at 10:00 a.m. Saturday, June 29, 2019 at Park Cemetery in Carthage. Contributions may be made to Three Rivers Hospice or The Nature Conservancy, both in care of Ulmer Funeral Home. Online condolences may be made at www.ulmerfh.com. Arrangements are under the direction of Ulmer Funeral Home.

The family of Jacob Charles Lowe created this Life Tributes page to make it easy to share your memories.