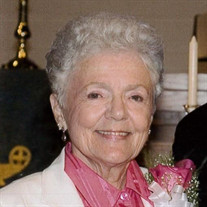 Jacquelyn “Jacquie” Florence Rush-Weissenberger (nee Peterson) passed away on Sunday, November 19, 2017. Jacquie was born on October 23, 1932 in Chicago, IL to Frederick and Virginia Peterson. Jacquie was originally trained in office administration, but over the years she became self-employed cleaning homes. Jacquie married Gaylord D. Rush in 1950. They began their married life in Illinois where they had four children: James, Gaylin, Valerie and Steven. In 1975, they moved to Carthage, MO where Gaylord was the owner/operator of Rush Sheet Metal until he retired. Years after Gaylord’s passing, Jacquie married Harry Weissenberger, also of Carthage. Harry preceded Jacquie in death on May 11, 2017. Jacquie is survived by son, James of Illinois; daughter, Gaylin and husband Leon of Missouri; daughter, Valerie and husband Robert of Illinois; and son, Steven and wife Sue of Idaho, along with numerous grandchildren and great grandchildren. A funeral service will be held at 2:00 p.m. Saturday, November 25, 2017 at Ulmer Funeral Home in Carthage. Burial will be at Oak Hill Cemetery in Carthage. A celebration of Jacquie’s life will be held at Foxberry Terrace, 4316 St. Louis St., Webb City following the graveside service. Memorial gifts/donations may be made to Foxberry Terrace Assisted Living in care of Ulmer Funeral Home. Online condolences may be made at www.ulmerfh.com. Arrangements are under the direction of Ulmer Funeral Home.

The family of Jacquelyn Florence Rush-Weissenberger created this Life Tributes page to make it easy to share your memories.