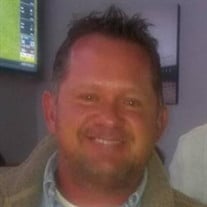 Jason Goade, 49, passed away unexpectedly in his home, in Carthage, Missouri, on September 25, 2021. Jason was born in Joplin, Missouri on November 12, 1972 to Ralph and Mary Goade who have preceded him in death. Jason was brought up playing baseball. He held the Little League homerun record and his team almost made it to the Little League World Series! He loved playing baseball with his son. Jason graduated from Joplin High School in 1990. He married his love and high school sweetheart Marcie Spiva on September 5, 1998. Jason and Marcie were best friends and partners in life, building the successful Landmark Home Builders. Jason had served on the board of Joplin Home Builders Association. He built beautiful custom homes all over the area. Prior to this he was a manager at FedEx. Jason’s pride and joys were his children, daughter Ava, a sophomore at Carthage High School, and son Jaxon, a sixth grader at Carthage. His kids’ friends loved Jason and he was a positive father figure to everyone. Jason was an example of a giver and always put other first expecting nothing in return. He was very positive and always had a joke to tell. Despite major difficult back surgeries he kept going and stayed positive for his wife and kids. Jason was not only a talented builder, but an artist, a great cook, and never knew a stranger. Besides his wife, Marcie and his children Ava and Jaxon, Jason is survived by his beloved in laws, Danny and June Spiva, his best friend and brother, Scott Goade and his sister in law Jane of Carl Junction, brothers Mike and Brian, and several nieces, nephews, and beloved aunts, uncles, and cousins. Jason was a baptized member of the 7th Day Adventist Church. In lieu of flowers, donations to Ava and Jaxon’s education fund can be made at: Goade Educational Fund in care of Ulmer funeral Home. A service will be held for Jason at Ulmer Funeral Home. A Celebration of Life will be held on Thursday, September 30, 2021 at 4:30 pm in the Ulmer Funeral Chapel.

Jason Goade, 49, passed away unexpectedly in his home, in Carthage, Missouri, on September 25, 2021. Jason was born in Joplin, Missouri on November 12, 1972 to Ralph and Mary Goade who have preceded him in death. Jason was brought up playing... View Obituary & Service Information

The family of Jason Goade created this Life Tributes page to make it easy to share your memories.

Jason Goade, 49, passed away unexpectedly in his home, in Carthage,...