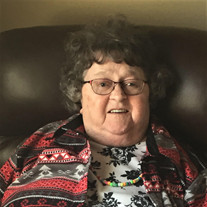 Jean Arlene Webb Robbins, 78, passed away Monday, February 25, 2019 at Sonshine Manor in Republic, MO. Jean was born March 14, 1940 in Iowa City, IA to Paul L. and Hazel I. “Dagel” Uilk. Jean was a resident of Carthage for 40 years, a homemaker and attended the Assembly of God and the Salvation Army Churches in Carthage. For the past nine years she resided at Branson and most recently at the Sonshine Manor in Republic. Jean was united in marriage to Donald Webb on May 23, 1971 in Carthage; he preceded her in death in 1990. Jean is survived her seven children: Patsy Tatum (Rodney) of Branson, Peggy Currier (Hal) of Aurora, CO, Julie Campbell (Herb) of Republic, Arlene Miller (Robert) of Bullhead City, AZ, Dawn Bearpaw (Carl) of Leach, OK, Richard Hoveland (Grace) of Aurora, CO and Don Webb Jr. of Carthage. Jean is also survived by one sister, Marilyn Portis Monahan of Mason City, IA, 13 grandchildren and nine great grandchildren. Jean was preceded in death by her parents, one grandchild and one great grandchild. Visitation will be held at 10:00 a.m. on Friday, March 1, 2019 at Ulmer Funeral Home. Services will immediately follow at 11:00. Burial will be at Osborne Memorial Cemetery in Joplin. Contributions may be made to the Carthage Salvation Army Church. Online condolences may be made at www.ulmerfh.com. Arrangements are under the direction of Ulmer Funeral Home.

The family of Jean Arlene Robbins created this Life Tributes page to make it easy to share your memories.