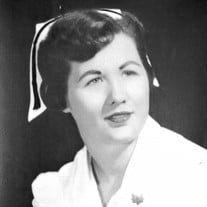 Jeannine D. Keener of Jasper, MO, joined her Lord and Savior on May 8, 2020. At the age of 88, she passed away at her home. Jeannine was preceded in death by her husband John Edward Keener, Jr. and her grandson, Caun Bartlett. Jeannine is survived by her children: Richard Brown, Randy Brown, Sandy (Doug) Moore, and stepchildren John Edward Keener III (Eddie) and Charmaine (Tim) Phillips; her grandchildren: Samantha, Nathan, Erick, Megan, Mark, Reed, Austin, Shellbi, Joel, Dinah, Gavin, and Jacob, as well as 15 great grandchildren. Jeannine was born on April 3, 1932 to John Oren and Anna Grace “Cloyd” Lanning. She graduated from Joplin High School in 1950, received her Bachelor of Nursing Degree from the Cleveland School of Nursing, Cleveland, OH. Jeannine worked in many of the hospitals and nursing facilities in the Southwest Missouri area for a period of 51 years. She held many positions in the nursing profession and really enjoyed her time as a school nurse at the East Newton School District and in the ICU at the old Oak Hill Hospital in Joplin. Jeannine had many beloved nicknames; “Ozark” and “Brownie” were just a couple. Jeannine was married to Harold M. Brown of Topeka, KS. In 1969, she moved back to the Joplin Area and served its citizens in the healthcare field. On June 24, 1981, she married John Keener, Jr.; they were married for 27 years before John’s passing. Jeannine and John moved back to their farm in Jasper in 1984, where she resided until her passing. Jeannine was an active member of the United Methodist Church and the woman’s VFW Auxiliary of Jasper. An open visitation will be Monday, May 11, 2020, from 12:00 pm to 4: 00 pm at Ulmer Funeral Home in Carthage. Graveside services will follow at Fasken Cemetery at 5:00 pm. The service will be officiated by Pastor Timothy Phillips. In lieu of flowers, donations may be made to the American Cancer Society, in care of Ulmer Funeral Home. Online condolences may be made at www.ulmerfh.com. Arrangements are under the direction of Ulmer Funeral Home.

Jeannine D. Keener of Jasper, MO, joined her Lord and Savior on May 8, 2020. At the age of 88, she passed away at her home. Jeannine was preceded in death by her husband John Edward Keener, Jr. and her grandson, Caun Bartlett. Jeannine... View Obituary & Service Information

The family of Jeannine D. Keener created this Life Tributes page to make it easy to share your memories.