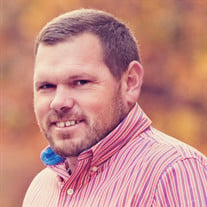 Jerry W. Pennington, Jr., 42, passed away February 1, 2020 at Mercy Hospital in Joplin. Jerry was born October 22, 1977 in Carthage to Jerry W. Pennington, Sr. and Lavona “Jones” Pennington. He enjoyed raising and working cattle. Among his many talents were small engine repair, fixing motors and being an amateur veterinarian. Jerry was a “wheeler-dealer”, cut wood for fun and was a member of Harvest Community Church. Jerry was united in marriage to Pattie R. White on June 12, 1998 in Miami, OK; she survives. Jerry is also survived by his mother and one son, Brett Pennington, both of Reeds; three brothers, Frank D. Pennington and wife Tina of Reeds, Rob Pennington and wife Tina of Webb City, Mike Jones and wife Lindsey of Odessa, KS. Jerry was preceded in death by his father, maternal grandparents, Hershel & Wanda Jones; paternal grandparents, James & Alma Pennington. Services will be held at 10:00 a.m. Wednesday, February 5, 2020 at Harvest Community Church in Avilla. Visitation will be held from 6:00 p.m. to 8:00 p.m. Tuesday, February 4, 2020, also at the church. Burial will be at Harvey Cemetery in La Russell. In lieu of flowers, contributions may be made to Brett Pennington College Fund. Online condolences may be made at www.ulmerfh.com. Arrangements are under the direction of Ulmer Funeral Home.

The family of Jerry W. Pennington Jr. created this Life Tributes page to make it easy to share your memories.