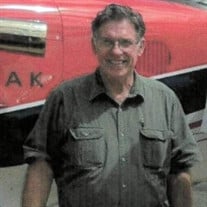 Jerry L. Turner, 73, passed away Monday, January 25, 2021 at Mercy Hospital in Joplin. He was born October 30, 1947 in Alba, MO to Albert Ross and Peggy (McDonald) Turner. Jerry’s life was full and blessed. He graduated from Carthage High School Class of 1965 and was a member of First Baptist Church. Jerry served in the United States Air Force (USAF) from 1965 to 1973. He was an aircraft ordinance technician with the 555th Tactical Fighter Squadron, supporting the McDonnell Douglas F-4C Phantom II at Udorn Royal Thai Air Force Base in North Eastern Thailand. He returned stateside and went to USAF computer school where he was later assigned to the Cheyenne Mountain Complex, which is located at Colorado Springs, CO. This was the center that controls the NORAD Defense System for all of North America. Jerry helped in building, troubleshooting, and maintaining the systems within the complex from generators to computers – no laptops 😊 at a time when computers did not truly exist until this team built them. He was the Chief Pilot for Leggett & Platt in Carthage for many years. During his tenure, he was instrumental in the department transitioning from turbo-prop aircraft to turbine jet aircraft. Jerry was well known in the flight community as having a wide variety of experience, having flown aircraft ranging from the Douglas DC 3 to a Pitts Special. Many will be surprised that he was a rated helicopter pilot. As flight instructor, he taught powered flight as well as sailplanes. Jerry worked for Wyandotte Precision Products (machine shop in Joplin). He provided reverse engineering and digital design for parts to be fabricated. Working in conjunction with Oklahoma State University (OSU), he worked on several projects to aid the U.S. Government to develop technical data packages and samples for systems no longer supported. These projects ranged from aircraft electronic control switches, heavy duty truck wheel bearings and even titanium parts that go into an USAF F-15 Fighter Aircraft engine compartment. Jerry had a wide variety of interests: electronics, computer aided design (CAD) guitar playing, target shooting, skeet shooting, collecting firearms, motorcycle riding, woodworking and, best of all, building 3-D puzzles out of wood and metal that were “just difficult” to solve. His greatest joy was spending time with his children and grandchildren. Jerry was united in marriage with his one true love, Donna J. Stanley, on October 2, 1965 in Denver, CO. She preceded him in death on November 8, 2018. In 1975, Jerry and Donna began their service with Mission Aviation Fellowship, serving in Honduras, Nicaragua and Costa Rica. During their tour in Central America, it was a time of civil war and unrest. Jerry was instrumental in uncovering violent crimes by flying investigators into remote areas, achieved by making river sandbars a makeshift landing strip – one attempt/first attempt. Jerry was once asked what it is like landing in the remote strips “Well, the best way I can describe it is tonight, when you get home, park your car in your garage at 70 MPH.” In 1982, they moved to the Miami/Ft. Lauderdale Area to provide air service to Haiti. In 1986, they moved to the Carthage Area, where he continued his love of flying and teaching others. Jerry is survived by three daughters, Gayla Gelven (Paul) of Sperry, OK, Lisa Irwin (Kelly) of Malvern, AR, and Stacy Lee (Barry) of Burlington, KS; five grandchildren, Stefan Gelven of Stillwater, OK, Marie Gelven of Denver, CO, Kalynn Lee, Bryce Lee and Blake Lee of Burlington, KS; one brother, Ross Turner (Sarah) of Grove, OK; six nephews, Jeremy, Spencer, Jason, Jared, niece Jamie, Josh and Zac. A memorial graveside service will be held at 10:00 a.m. Friday, May 28, 2021 at Park Cemetery in Carthage, followed by full military honors. In lieu of flowers, contributions may be made to Mission Aviation Fellowship (M.A.F.) or Wounded Warriors Project in care of Ulmer Funeral Home. Online condolences may be made at www.ulmerfh.com. Arrangements are under the direction of Ulmer Funeral Home.

Jerry L. Turner, 73, passed away Monday, January 25, 2021 at Mercy Hospital in Joplin. He was born October 30, 1947 in Alba, MO to Albert Ross and Peggy (McDonald) Turner. Jerry&#8217;s life was full and blessed. He graduated from Carthage... View Obituary & Service Information

The family of Jerry Lee Turner created this Life Tributes page to make it easy to share your memories.