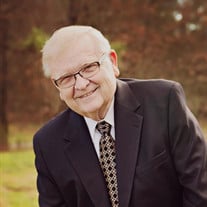 John Martin Egelston, 78, of Carthage, MO, walked through Heaven’s Gate into eternal life April 9, 2019. Martin was born to John and Opal Egelston on January 6, 1941, in Sandwich, IL, as the 3rd of 5 children. He grew up helping his dad in the cattle business in several states. In 1959, his family moved to Carthage to manage Senator Richard Webster’s Flying W Ranch. Martin graduated with the Carthage High School Class of 1959, and served in the Army Reserves for six years. On September 30, 1961, he married Janice M. Hutchins of Carthage. He entered the field of Commercial Refrigeration, where he worked for his father-in-law, and later worked as a business owner and independent contractor. He stayed in that line of work until he retired in 2013. In his retirement years, he enjoyed woodworking, gardening, visiting with his buddies at the YMCA, having breakfast with his pastor, being with friends, and attending his church. Martin loved his family and was well known for his great sense of humor. Martin is survived by his wife Janice, his son and daughter-in-law Douglas and Vera Egelston of Joplin, MO, his daughter and son-in-law Amber and Tim Cooper of Reno, NV, his daughter and son-in-law Laura and Brent Frakes of Cleveland, TN, nine grandchildren, and sister Forrest Sue Egelston of Elizabethtown, NC. Martin was preceded in death by his daughter Deidra Egelston of Grove, OK, brother Russell, and sisters Janet and Anna. Visitation will be held on Friday, April 12 at 10:00 a.m. with services immediately following at 11:00 a.m. at Crossroads Baptist Church in Carthage, MO. Interment will be at Carthage Park Cemetery. Memorial donations in lieu of flowers may be made to Shriners Hospital (www.shrinershospitalsforchildren.org/shc/donate) and Crossroads Baptist Church (P.O. Box 676, Carthage, MO 64836). Online condolences may be made at www.ulmerfh.com. Arrangements are under the direction of Ulmer Funeral Home.

John Martin Egelston, 78, of Carthage, MO, walked through Heaven&#8217;s Gate into eternal life April 9, 2019. Martin was born to John and Opal Egelston on January 6, 1941, in Sandwich, IL, as the 3rd of 5 children. He grew up helping his... View Obituary & Service Information

The family of John Martin Egelston created this Life Tributes page to make it easy to share your memories.