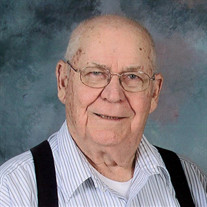 John Thomas Gray, Jr., 90, passed away Wednesday, February 21, 2018 at Webb City Health & Rehabilitation. John was born October 4, 1927 in Union, Missouri to John Thomas Gray, Sr. and Mathilda “Clark” Gray. John was a longtime resident of Carthage and served in the United States Marine Corp. He was a chemical operator for Hercules Powder Plant and retired from IRECO. John was a member of the First United Methodist Church in Carthage. John was united in marriage to Neva Brummett on November 6, 1948 in Bentonville, Arkansas; she survives. John is also survived by one son, John Thomas Gray III and husband, Stephan McAteer of Little Rock, AR; one daughter, Amy Christine Gray of Fayetteville, AR; one daughter-in-law, Patty Hunter; one granddaughter, Elizabeth Gray; one sister, Marian Hilgedick and husband Chester, along with numerous nephews and nieces. John was preceded in death by three brothers, Earl, Curtis and Clifford; four sisters, Lucille, Pauline, Dorothy and Lorraine. Graveside services will be held at 10:00 a.m. Saturday, February 24, 2018 at Park Cemetery in Carthage. Online condolences may be made at www.ulmerfh.com Arrangements are under the direction of Ulmer Funeral Home.

The family of John Thomas Gray Jr. created this Life Tributes page to make it easy to share your memories.