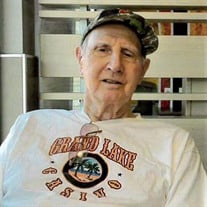 John “Jack” A. Motz, 91, passed away Saturday, December 28, 2019 at Granby House Nursing Home in Granby. Jack was born September 17, 1928 in St. John’s, MI to Fred Anthony and Christina “Mueller” Motz. He had lived in the Carthage area since the mid-1960’s and was the owner/operator of Jack’s Mobile Home Sales in Carthage. Jack was united in marriage to Barbara J. Morgan on January 19, 1957 in St. John’s, MI; she preceded him in death on December 3, 2012. Jack is survived by two sons, Kevin Motz and Brian Motz (Michael Click), both of Carthage; one daughter, Colette Jung (Ervin) of Pierce City, MO; one sister-in-law, Harriette Motz of Michigan; five grandchildren, Ryan (Lauren), Steven, Sarah, Debbie and Lee; two great grandsons, Logan and Connor; and several nieces and nephews. Jack was preceded in death by his wife and parents, two daughters-in-law, Sharon Motz and Debra Motz; three brothers-in-law, David Morgan, Thomas Morgan and Dale Morgan; and seven brothers and sisters. Visitation will be held from 12:30 p.m. to 1:30 p.m. Friday, January 3, 2020 at Ulmer Funeral Home. A graveside service will immediately follow at 2:00 p.m. at Ozark Memorial Park Cemetery in Joplin. Online condolences may be made at www.ulmerfh.com. Arrangements are under the direction of Ulmer Funeral Home.

The family of John "Jack" Motz created this Life Tributes page to make it easy to share your memories.