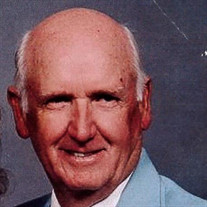 John Z. Pettey, 92, passed away Sunday, July 1, 2018. John was born December 1, 1925 in Hazen, AR to John Grady and Gracie “Minton” Pettey. John joined the United States Army in early 1945 after graduating high school. John saw action during World War II, the Korean Conflict, and the Vietnam War, receiving many awards of distinction for 30 years’ service, such as the Bronze Star and the Legion of Merit, plus numerous letters of recommendations throughout his military career. After a few years of selling framed art throughout the south with his wife, Sherry, the family settled in Carthage, where John began a career spanning 16 years as a Walmart Associate, retiring in his mid-eighties due to health. John was a loving and caring husband to his wife, Sherry, and is survived by seven children: Phyllis Peirce and husband Jimmy of Little Rock, AR, Jeffrey Pettey and John Pettey of Ft. Lauderdale, FL, Sara Goeken and husband Kelly of Carthage, MO, Michael Pettey of Joplin, MO, Justin Pettey of Springfield, MO and Stacey Pettey of Lawrence, KS. He is also survived by seven grandchildren. John was preceded in death by his first wife, Jackie Richmond, his parents, three brothers, Virgil, Curtis and Frankie, one son, Kenny, and one daughter, Sheryl. John loved the Lord Jesus and desired that all people would follow the Lord’s will and accept His grace. John remained true to his relationship with the Lord. He will be greatly missed by his family and friends, but what a reunion that will take place in eternity. Visitation will be held from 1:00 p.m. to 2:00 p.m. Thursday, July 5, 2018 at Ulmer Funeral Home in Carthage. A visitation will also be held from 10:00 a.m. to 11:00 a.m. Friday, July 6, 2018 at Westbrook Funeral Home in Hazen, AR. Graveside services will be held at noon at Center Point Cemetery near Hazen, AR. Contributions may be made to Carthage Crisis Center or Habitat For Humanity in care of Ulmer Funeral Home. Online condolences may be made at www.ulmerfh.com. Arrangements are under the direction of Ulmer Funeral Home.

The family of John Z. Pettey created this Life Tributes page to make it easy to share your memories.