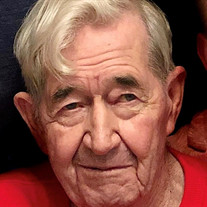 John Steele, 92, died peacefully at his home on Monday, November 18, 2019. John was born on May 17, 1927 in Carthage to the late William and Elva Steele; he was one of 13 children. After graduation from Carthage High School, he enlisted in the Navy and served as a chief petty officer. On February 9, 1947 he married Rebecca Westfall. John began a career in the car business by working in the parts department and later moved into selling new cars. He worked at the Chevrolet dealerships in Carthage and Joplin unit his retirement in 1992. John was preceded in death by one daughter, Johnna Steele Horton of Broken Arrow, OK, along with ten brothers and sisters. John is survived by his wife of 72 years, Becky Steele; one daughter Cindy Rogers (Harry) of Carthage; six grandchildren, Sam Rogers (Allison) and Chris Rogers (Tracy), both of Carthage, Brian Fieker (Amber), Kristen Mansfield (Adam), Brad Fieker and Jenny Petty (Jared), all of Broken Arrow, OK. He also leaves behind 14 great grandchildren, Aiden, Ben, Abby and Emme Rogers, Ashlyn, Luke, Jake and Harlow Fieker, Alexia Weldon, Paxton Mansfield, Destiny and Rylee Massey, Wyatt and Owen Petty, all of Broken Arrow, OK; three sisters, Helen Poindexter of Las Vegas, NV, Doris Glines of Rogers, AR and Nancy Eden of Medford, OR. John was a member of the Legion of Leaders, the highest level awarded for salesmanship, and the Jaycees. He was a proud member of the Shriners and helped obtain the train for the Train-Crew Shriners. John was an avid fisherman and loved fishing for crappie at Stockton Lake. His family was his pride and joy; he loved spending time with his grandchildren and great grandchildren. He was happiest when he was grilling and watching the kids swim in the backyard or hosting a fish fry featuring his famous hushpuppies. Graveside services will be held at 10:00 a.m. Friday, November 22nd at Park Cemetery. Grandchildren will serve as pallbearers. In lieu of flowers, memorial gifts may be made to the St. Louis Shriners Hospital or St. Jude’s Children’s Hospital in care of Ulmer Funeral Home. Online condolences may be made at www.ulmerfh.com. Arrangements are under the direction of Ulmer Funeral Home.

John Steele, 92, died peacefully at his home on Monday, November 18, 2019. John was born on May 17, 1927 in Carthage to the late William and Elva Steele; he was one of 13 children. After graduation from Carthage High School, he enlisted in... View Obituary & Service Information

The family of John Steele created this Life Tributes page to make it easy to share your memories.

John Steele, 92, died peacefully at his home on Monday, November...