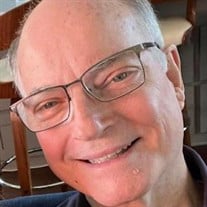 John Winter Witherspoon, 72, passed away Wednesday, May 4, 2022 in Bentonville, Arkansas. John was born January 1, 1950 to Robert Glenn Witherspoon Sr. and Ruth (Winter) Witherspoon in Denton, Texas. John grew up in Rotan, Texas and lived for a time in Henderson, Texas and Cushing, Oklahoma before relocating to the Carthage, Missouri area in about 2002. He studied at the University of Texas in Arlington, where he graduated with a double major and received a Bachelor of Science in Biology and Environmental Science. John spent twenty-five years with the State of Texas – Water Conservation. John was also a member of Bethany Baptist Church in Carthage, Missouri. John was united in marriage to Janice Ann Lee on August 4, 1973 in Burleson, Texas; she preceded him in death. John is survived by his fiancé, Sheryl Hahn of Gentry, Arkansas; one son, John Mark Witherspoon (Emma) of Webb City, Missouri; four daughters, Jana Kaye Witherspoon of Sundia, Texas, Julie Christine Tippel (Dan) of Ferndale, Washington, Jami Lynn Shetler of Longmont, Colorado and Joy Elizabeth Witherspoon of Johnstown, Colorado; thirteen grandchildren, Mason, Kaori, Dontae, Zion, Katy, Mea, Lyssa, Wes, Krista, Mere, Stasi, Lukas and Jadyn; and two sister-in-laws, Susan Witherspoon of Mount Pleasant, Texas and Cindy Lee Brown of Flower Mound, Texas. John is preceded in death by his wife, Janice Witherspoon; his parents, Robert and Ruth Witherspoon; and one brother, Dr. Robert Glenn Witherspoon Jr. on March 27, 2022. Services will be held 2:00 p.m. Tuesday, May 10, 2022 at Bethany Baptist Church in Carthage, Missouri. A visitation will be held from 11:00 a.m. to 12:00 p.m. prior to the service. Contributions may be made to Bethany Baptist Church Maintenance Fund in care of Ulmer Funeral Home. Online condolences may be made at www.ulmerfh.com. Arrangements are under the direction of Ulmer Funeral Home.

The family of John Winter Witherspoon created this Life Tributes page to make it easy to share your memories.