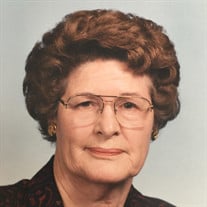 Joyce Lorece "Gray" Fadler, 92, departed this world to join her Heavenly Father on Wednesday, November 16, 2017. Mrs. Fadler was born on February 21, 1925 in Clarksville, Texas to Richard Gray and Saloma “Smith” Gray. She was involved in the war effort of WW11, working in the Dixen Gun Plant and managing the PX at the Pampa Air Base in Pampa Texas, where she met her future husband, 1st Lieutenant Leonard Fadler. She also worked in retail and was a member of the Church of Christ and most recently worshiped with the Douglass Hills Church of Christ in Middletown, KY. Mrs. Fadler is survived by her brother, Jack (Velma) Smith of Colorado Springs, CO; two daughters, Pam (Marvin) Johnson of Jacksonville, FL and Barbara (Doug) Allan of Shelbyville, KY; four grandchildren: Jennifer (Gary) Johnson and Jeremy (Kerry) Johnson both of Jacksonville; Ryan (Amy) Allan of Shelbyville, KY and Lyndsay (Jason) Magar of Louisville, KY; seven great grandchildren: Mia and Luke Johnson, Perry and Abby Allan, and Tess, Max, and Corinne Magar. Mrs. Fadler is preceded in death by her husband of 60 years, Leonard Fadler; her sister, Lorene Fry; and her brother, Floyd Smith, Jr. Graveside services will be held at 2:00 p.m. Wednesday, November 22, 2017 at Fasken Cemetery, Northeast of Carthage. Contributions may be made to Stafford Children's Home care of Ulmer Funeral Home. Condolences may be made at www.ulmerfh.com. Arrangements are under the direction of Ulmer Funeral Home.

The family of Joyce "Gray" Fadler created this Life Tributes page to make it easy to share your memories.

Joyce Lorece &quot;Gray&quot; Fadler, 92, departed this world to join her...