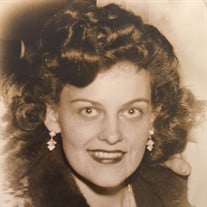 Virginia Jewellene (Judy) “Delzell” Stockl, 91, passed away March 18, 2018 at her home in Carthage with her children at her bedside. Judy was born December 7, 1926 in Joplin, MO to Everett and Opal “DePew” Crume. She was a long time resident of Duenweg, MO. When she retired, she moved to Table Rock Lake, then returned to Carthage. When Judy was seven years old, she lost her youngest brother, Oscar Crume, to natural causes Christmas Eve 1933. Then on Christmas Eve 1934, she lost her mother, one sister (Frances Crume) and two brothers (James and Buddy Crume) to a house fire. Judy and her sister, Jeannie, lived with their grandparents, Mr. & Mrs. William Depew, in Granby through junior high, then lived in Joplin with their Aunt Bertha and Uncle Grant Asher and their two daughters, Norma and Jackie. Judy was a hairdresser by trade; she owned and operated Judy’s Fashion Corner in Duenweg. In her younger years, she modeled clothes for Kassab’s in Joplin. Judy was a member of the Duenweg Assembly of God; she was a member of the Elks Lodge in Eureka Springs, AR and belonged to the Garden Club of Eureka. Judy was united in marriage to Orval Delzell in Joplin in 1943; he preceded her in death in 1971. She was then united in marriage to William Stockl in Carthage in 1974; he preceded her in death in 1997. Judy was preceded in death by her father, Everett Crume, in 1979 and one sister, Adetta “Jeannie” Delzell, in 2017. Judy is survived by three sons, John Delzell and Doug Delzell, both of Carthage, and Julian "Corky" Delzell (Linda) of Carl Junction; one daughter, Saundra Pope (Larry) of Claremore, OK; seven grandchildren, seventeen great grandchildren, and five great-great grandchildren. Visitation will be held from 1:00 p.m. to 2:00 p.m. Monday, March 26, 2018 at Ulmer Funeral Home, with services to immediately follow. Burial will be at Diamond Cemetery. Contributions may be made to St. Jude’s Children’s Hospital in care of Ulmer Funeral Home. Online condolences may be made at www.ulmerfh.com. Arrangements are under the direction of Ulmer Funeral Home.

The family of Judy "Delzell" Stockl created this Life Tributes page to make it easy to share your memories.