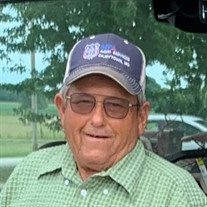 Gilbert Paul Harper Jr., age 76 of rural Carthage, passed away Monday morning at his home surrounded by family following a lengthy illness. Junior was born September 22nd, 1945, in Prosperity, MO to the late Paul and Dorothy (Wynne) Harper. Early on he attended Garden Dell School followed by Charter Oak School until the eighth grade, both in rural Carthage. He later graduated from Carthage High School in 1963 where he was an FFA member. He was drafted into the United States Army in 1968 where he was a driver in the motor pool. Junior was a lifetime farmer in the Carthage area. From the time he was old enough to walk, he was following and helping his dad around their farm. They raised beef cattle, milked cows, made hay, and raised crops. He spent most of his life farming alongside his dad Paul and with his son Blake. At one time there were three generations of Harpers working alongside each other on their farm. In June of 1984, he married Clara Ann Porter of Jasper, MO. He was a member of the Alba Masonic Lodge and Pleasant Hill Church. Junior enjoyed laughing and engaging in humor with those around him. He also had two very special granddaughters Morgan and Kenzie who were the light of his life. They loved to ride with their Papa around the farm in his Gator and on “Tom” the tractor. Survivors include his wife Clara, of the home. One son, Blake, and wife Rachel of Carthage and two granddaughters, Morgan, and Kenzie Harper. Two sisters Linda Hoofnagle and husband Gary of Carthage, and Jeannie Wells of Carthage, along with several nieces and nephews. He is proceeded in death by his parents and one brother-in-law Weldon Wells. Visitation will be Wednesday, May 25th, 2022, from 6pm-7pm at Ulmer Funeral Home in Carthage, Missouri. Funeral services will be Thursday, May 26th, at 10am at Ulmer Funeral Home followed by graveside services at Paradise Cemetery in Jasper, Missouri. In lieu of flowers, the family requests donations be made to the Pleasant Hill Church Children’s Ministry, in care of Ulmer Funeral Home. The family would like to thank Dr. Bowles and staff, and Dr. Nagaria, Nurse Paige, and the staff at Carthage Heartland Kidney Center for their generous care over the years. Services are under the direction of Ulmer Funeral Home.

The family of Junior Harper created this Life Tributes page to make it easy to share your memories.