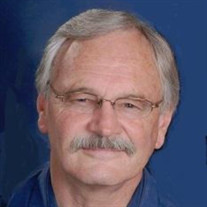 Reverend Larry Gene Graham, 70, of Webb City, MO, received his Heavenly reward on August 5, 2020 after a valiant battle against cancer. Larry was born in El Paso, TX to his beloved parents, Howard Ralph and Betty Ruth “Thompson” Graham on March 14, 1950. In 1967, at age 17, he preached his first revival in Kauai and continued in the ministry for the next 53 years. Throughout his college years, Larry preached revivals and participated in domestic and foreign missions trips. He completed his Bachelor of Science Cum Laude as his Class Salutatorian from Southern Bible College in 1972. He later completed a Master of Arts from the Assemblies of God Theological Seminary and was ordained in August 1974. After college, he served as a youth pastor and district youth director in Kansas. He would go on to serve full-time as a missionary in Honduras, Guatemala, Indonesia and Trinidad and Tobago. After rekindling their college romance in late 1977, Larry and Donna Elaine Lawrence married on February 11, 1978, in Houston, TX. They set up a home in Bellflower, CA, where they welcomed their first child, Larry Paul, in 1979. They served as youth pastors and associate pastors until 1981 when they moved to Asuncion, Paraguay to serve as church planters. There they welcomed their daughter, Andrea, to the family in 1982. They continued church planting, teaching in Bible Schools and hosting TV and Radio shows until 1988, when they moved to Carthage, MO. There, he served as interim pastor of Oak Street Tabernacle Church and continued to raise missionary support until 1992 when they moved to Tarragona, Spain. They planted a church and remained in Spain until 1996. Larry and Donna participated in Home Missions with the Assemblies of God until 1998 when they became associate pastors at Willowbrook Assembly of God in Houston, TX. In December of 1999, they returned to Carthage, MO, where they pastored Grace Pointe Assembly of God until retirement in July of 2018. While pastoring, Larry traveled on a series of mission trips to Paraguay, Ecuador, Peru and Equatorial, Guinea. After retirement he and Donna settled in Webb City, MO, and he traveled on one last mission trip to Africa’s Ivory Coast in January of 2020. Larry was saved at a tender age and remained a devoted follower of Christ throughout his life. He was exemplary in his humility, compassion, kindness and authenticity, and he knew no stranger. Larry delighted in his family and friends and dearly loved to laugh! He adored his wife of almost 43 years. They enjoyed many adventures and laughs throughout the years; they were true teammates in life and ministry. He was a devoted father to his beloved children and he lit up when speaking of them. As a grandfather, he had a wonderful relationship with all nine of his grandchildren; they were his true delight. He shared a close relationship with his brother, Stanley, with whom he enjoyed a standing appointment for Saturday phone calls. Over the years, he shared great relationships with his sisters-in-law, brothers-in-law, beloved nieces, nephews and cousins. Larry is survived by his loving wife, Donna; one son, Major Larry P. Graham (Kim) of Raeford, NC and their children, Isaiah, Jackson, Scarlett and Warner; one daughter, Andrea Gaither (Jim) of Joplin, MO and their children, Alexis, Faith, Taylor, Carter and Jace. Larry was preceded in death by his parents and one brother, Stanley Graham. A celebration of Larry’s life will be held at 1:00 p.m. on Friday, August 14, 2020 at Christpoint Church, 1500 E. 7th Street, Galena, KS, with a host of ministerial colleagues and friends officiating. Service will be streamed live on Facebook / Christpoint Church. In lieu of flowers, contributions may be made to Assemblies of God at sendersfund.ag.org to enable missionaries to meet their budgets. Online condolences may be made at www.ulmerfh.com. Arrangements are under the direction of Ulmer Funeral Home.

The family of Larry Gene Graham created this Life Tributes page to make it easy to share your memories.