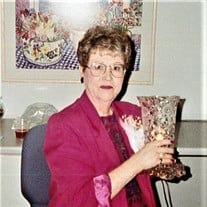 LaVera May Goodnight, 83, went to be with her Lord on Friday, September 14, 2018. LaVera was born February 21, 1935 in Carthage to Edward C. and Elsie May “Lown “ Tatum. LaVera was united in marriage to Billy Joe Goodnight on June 28, 1952 in Eureka Springs, AR; Billy preceded her in death in 2017. They were married for 65 years. LaVera was employed by Central National Bank of Carthage in 1952. Then they moved to California in 1957, where she worked for a savings and loan company. They returned to Carthage in 1970, where she was employed by Bank of Carthage, Boatmen’s Bank and Hometown Bank. In 1971, they bought a farm west of Sarcoxie, where they lived unit their health failed. In 2007, they moved to Carthage. Billy and LaVera had no children, but LaVera helped raise several of her brothers and a sister. There were 11 brothers, four sisters and one half-sister. LaVera is survived by nine brothers, Ron Tatum of Carthage, Robert Tatum of Owasso, OK, Ralph Tatum of Rockport, TX, Ray Tatum of Arma, KS, Rollie Tatum of Cheyenne, WY, Rex Tatum of Coweta, OK, Rickie Tatum of Springfield, MO, Randy Tatum of Carthage, Rodney Tatum of Branson, MO; one sister, Linda Adams of Joplin; one sister-in-law, Paula Tatum of Branson, as well as several nieces and nephews. LaVera was preceded in death by her husband; two brothers, Richard Tatum in 2010 and Royce Tatum in 2017; three sisters, Lavonne Vonier, Ilene Tatum and Jane Lawrence. LaVera will be greatly missed by all who knew her. She never met a stranger and was loved by everyone. She loved all animals and had several cats and dogs. She also enjoyed playing bingo. God has taker her home to a new body, pain-free and where there is no Alzheimers. Visitation will be held from 12:00 to 1:30 p.m. Tuesday, September 18, 2018 at Ulmer Funeral Home. Graveside services will be held at 2:00 p.m. Tuesday, September 18, 2018 at Jasper Cemetery, East of Carthage. Contributions may be made to the Carthage Humane Society in care of Ulmer Funeral Home. Online condolences may be made at www.ulmerfh.com. Arrangements are under the direction of Ulmer Funeral Home.

The family of LaVera May Goodnight created this Life Tributes page to make it easy to share your memories.

LaVera May Goodnight, 83, went to be with her Lord on Friday,...