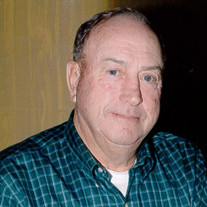 Leland Dwayne Still, 82, passed away January 18, 2018 at his home in Carthage. Leland was born December 18, 1936 in Barton County to James A. and Nadeane “Stith” Still. Leland was a lifetime resident of Southwest Missouri, graduated from Jasper High School Class of 1955 and served in the United States Army from 1960 to 1962. He was employed by the Missouri Highway Department for 17 years and was the manager of MFA Oil Company in Jasper for 27 years. He retired in 1999 and worked for the Jasper Special Road District for a few years. Leland attended the First United Methodist Church in Carthage. Leland was united in marriage to Karen “Hern” January 31, 1958; she survives. In 2006, he and Karen moved to Carthage, where he was known as the neighborhood “go-to-guy”. He would gladly repair lawn movers, weed-eaters or anything with moving parts. He was always willing to help out in any way possible. His hobby was making animated wood lawn ornaments, which he gave away. There are birds and bees flying in many Carthage yards, as well as in other states. He was also known as “The Candy Man” because he always carried root beer barrels and passed them out to everyone. Leland is survived by his wife of nearly 60 years; four daughters, Kelly Harris (Mike) of Carthage, Stephanie Still of Battlefield, Lisa Still of Carthage, and Melanie Clevenger of Springfield; four grandchildren, Addi Peavler (Alvin) of Carl Junction, Mathew Still of Mt. Vernon, Erin Harris of Carthage, and Laken Walker of Battlefield; four step-grandchildren, Heather McDermott (Chris), Amy Harris, Annie Goodwin (John), and Alex Brantley; one great granddaughter, Aubrey Peavler; eight step-great grandchildren, Addi Harris, Finn McDermott, Avery Harris, Will Goodwin, Carson Brantley, Cameron Brantley, Dakota Peavler, and Mason Peavler; two brothers, James Still (Florence) and Richard Still (Fern); five sisters, Margaret Maley (L.H.), Bonnie Wilson, Maribeth Ward, Connie Barclay (Cecil) and Elizabeth Wilson (Bill). Leland was preceded in death by his parents; three sisters, Nancy Still, Mermyl Wyant, and Betty James; one brother, Harvey Still; and step-grandson, Heath Harris. Visitation will be held from 6:00 p.m. to 7:00 p.m. Monday, January 22, 2018 at Ulmer Funeral Home. Memorial service will be held at 1:30 p.m. Tuesday, January 23, 2018 at First United Methodist Church in Carthage. A private family burial service will precede the memorial service. Contributions may be made to St. Jude Children’s Hospital or Families in Recovery in care of the Ulmer Funeral Home. Online condolences may be made at www.ulmerfh.com. Arrangements are under the direction of Ulmer Funeral Home.

Leland Dwayne Still, 82, passed away January 18, 2018 at his home in Carthage. Leland was born December 18, 1936 in Barton County to James A. and Nadeane &#8220;Stith&#8221; Still. Leland was a lifetime resident of Southwest Missouri, graduated... View Obituary & Service Information

The family of Leland Dwayne Still created this Life Tributes page to make it easy to share your memories.