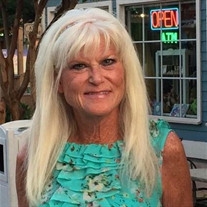 Leslie Dauraye “Carter” Chentnik, 60, passed away peacefully on April 16, 2019 at her home in Branson, MO with her family at her side. She was born December 9, 1958 in Kansas City, MO to Donald and Patricia “Dauray” Carter. Leslie was a nurse, attended the First United Methodist Church in Branson, and loved boating, painting, drawing, traveling, golf and spending time with her family. Leslie was united in marriage to her best friend, Steve Chentnik November 24, 1979 at the First United Methodist Church in Mountain Home, AR; he survives. Leslie is also survived by two daughters, Nicole Anderson and her husband Aaron, and Stephanie Chentnik and her fiancé Robert Perry; two sisters, Kelli Camp and Leigh Anne Carter, both of Mountain Home, AR; two grandchildren, Mila Anderson and Kayden Chentnik; mother-in-law Carol Chentnik, as well several brothers-in-law. She loved her large family dearly. Leslie was preceded in death by her father, Donald Carter. Funeral services will be held at 11:00 a.m. Saturday, April 27, 2019 at Ulmer Funeral Home. Visitation will be held from 6:00 p.m. to 8:00 p.m. Friday, April 26, 2019 at Ulmer Funeral Home. Online condolences may be made at www.ulmerfh.com. Arrangements are under the direction of Ulmer Funeral Home.

The family of Leslie "Carter" Chentnik created this Life Tributes page to make it easy to share your memories.