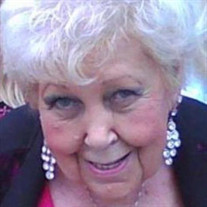 Loretta McBride, 84, entered her eternal home on Thursday, September 19, 2019, surrounded by family at Mercy Hospital, Joplin, MO. Loretta was born in Greenfield, MO on July 20, 1935 to Cleo A. Ward and Myrtle (Morris) Ward. Loretta married Lee A. Robertson and later married Ernest Carl McBride, who preceded her in death in 1975. She was a homemaker, a member of the VFW Auxiliary for many years, and attended the Nazarene Church of Carthage where she was baptized in 2011. Survivors include four children: Sue (Ron) Clay, Wichita, KS; Karen Boatright, Webb City, MO; Mike Robertson, Joplin, MO; Lisa (Amy) McBride, Joplin, MO; two step-children: Gary McBride, Moore, OK and Karen Ortiz, Tulsa, OK; eight grandchildren: Chelsea Clay, Jacob and Joshua Robertson, Christi Gideon, Cory and David Boatright, Shelly Cox and Mathew Robertson; two step-grandchildren, Dalton and Shelby Mason; and 10 great grandchildren. Loretta was preceded in death by two children, Debbie Rhode in 2015 and Douglas Robertson in 2009, along with nine brothers and sisters. Graveside services will be held at 10:00 a.m. Monday, September 23, 2019 at Park Cemetery in Carthage. In lieu of flowers, contributions may be made to the Loretta McBride Memorial Fund. Online condolences may be made at www.ulmerfh.com. Arrangements are under the direction of Ulmer Funeral Home.

The family of Loretta McBride created this Life Tributes page to make it easy to share your memories.