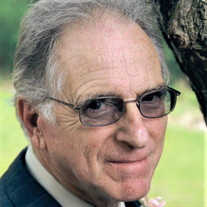 Louis “Gene” Bruffett, Sr., 85, passed away September 19, 2019 at Spring River Christian Village in Joplin after a short illness. Gene was born July 14, 1934 in Carthage to Louis Allen and Clarice Bertha “Hooker” Bruffett. Gene Attended Anderson University for one year. In 1964, he received his Bachelor’s Degree in Elementary Education at Pittsburgh State University. In 1974, he received his Master’s Degree in Elementary Administration, also at PSU. He attended Ozark Bible College for one year. Gene worked nine years at Duenweg Consolidated Elementary School #119 as a teacher, principle and bus driver. Then, for 27 years he was the assistant principle of Joplin Elementary. Gene enjoyed the lake, especially his lake home at Eagle Rock. Gene was united in marriage to Doris Marilyn Watts on August 4, 1956 in Beulah, Kansas; she preceded him in death February 25, 1989. He was then united in marriage to Pam Jones; she preceded him in death as well. On May 23, 2008, he was united in marriage to Joanne Swango in Eureka Springs, AR; she survives. Gene is also survived by one son, Gene Bruffett, Jr. (Debbie) of Carthage; two brothers, Paul Bruffett and Bob Bruffett (Susan), both of Jasper; one granddaughter, Chasie Stearnes (Kyle); one great grandson, Cooper Stearnes; four step-children, Jennifer, Stacey, Scott and Kara, as well as 13 step grandchildren. Gene was preceded in death by his parents; one son, Joe Bruffett; and one brother, Dick Bruffett. Visitation will be held from 1:00 p.m. to 2:00 p.m. Monday, September 23, 2019 at Ulmer Funeral Home. Funeral services will follow at 2:00 p.m. Burial will be at Paradise Cemetery near Jasper. Online condolences may be made at www.ulmerfh.com. Arrangements are under the direction of Ulmer Funeral Home.

The family of Louis "Gene" Bruffett created this Life Tributes page to make it easy to share your memories.