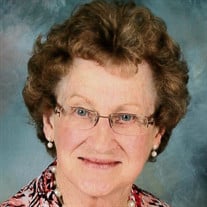 Margaret Mattie (nee Sheldon) Dale, 89, passed away April 17, 2018, at Mercy Hospital in Joplin, MO. Margaret was born June 3, 1928, in Carthage, MO, to Levi and Dorothy “Lewman” Sheldon. The oldest of two daughters, Margaret and her sister learned the value of hard work as they did the daily chores required of their farm Northeast of Carthage. Margaret attended Center Point and Elmira schools; she graduated from Carthage High School in 1946. After graduating, Margaret spent the next 14 years employed at Schreiber Foods. Margaret met Lee Roy Dale on a blind date. They eloped to Miami, OK, on May 23, 1956 and moved to Lamar where they began their family and operated Dales' Packing Company with Lee Roy's brother and sister-in-law, Jerry and Helen Dale. Margaret worked in this business until the plant closed in 1987 after a fire. Never one to be idle, Margaret worked as a lunch lady, as well as a hostess, at the Blue Top Restaurant. She continued working until she finally retired at the age of 80 and moved back to her hometown of Carthage. Margaret was a 50-year member of Mt. Hope Chapter #74, Order of the Eastern Star, and an active member of the Lamar Methodist Church. She was a skilled seamstress and sewed many outfits for her daughters, nieces and granddaughters. She enjoyed tending to her flower gardens and helping her neighbors, always with a cat prowling the premises. Margaret was preceded in death by one son, Lloyd Joslen, her parents and her husband. Margaret is survived by one sister, Gladys Lewis (Bill); one son, Bill Joslen (Sue); and two daughters, Lisa Tubaugh (Ray) and Karen Dale; three grandchildren, Billy Joslen (Teresa), Emily Blinzler (Marshall) and Natalee Tubaugh (Jacob Crazybear); one great-grandchild, Mason Blinzler, three nephews and two nieces. Graveside services will be held at 2:00 p.m. Thursday, April 19, 2018 at Memory Gardens Cemetery in Lamar, MO. In lieu of flowers, the family requests donations be made to the Masonic Home of Missouri in care of Ulmer Funeral Home. Online condolences may be made at www.ulmerfh.com. Arrangements are under the direction of Ulmer Funeral Home.

The family of Margaret Mattie Dale created this Life Tributes page to make it easy to share your memories.