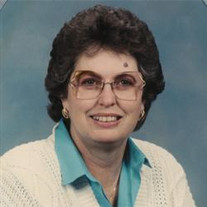 Marilyn Berry, 77, passed away November 20, 2016 at her home in Joplin, Missouri. Marilyn was born in Shattuck, OK to Charles Roberson and Fern Bishop Roberson November 26, 1938. She was a longtime Joplin resident. Everyone that knew Marilyn Berry has heard the phrase "Don and Marilyn's Workshop . . . Don works, Marilyn Shops". It was even the recorded message on her answering machine, even though it couldn't be further from the truth. Daycare owner, beautician, employee at Precious Moments Chapel, co-owner of a diesel company and a talented painter are just a few of the job titles on her resume, but what she enjoyed most was being a homemaker. She spent hours keeping multiple gardens, decorating and then re-decorating, finding any new recipe she could make and watching her grandkids and great grandkids grow. She was a seamstress, storyteller, cheerleader, advice giver, and so much more. She built a life of memories for not only herself, but for her family. To know her was to love her. She had the purest heart whose love came with no expectations, just a hug that held on a little tighter. Marilyn was united in marriage to Don Berry August 19, 1956 in Syracuse, MO; he survives. Marilyn is survived by two brothers Gary Roberson of Colorado Springs, CO and Roy Roberson of Lake Village, AR, one daughter Connie Hammond of Springfield, MO, two sons Chris Berry and wife Valerie and Michael Berry Sr. all of Carthage, seven grandchildren Andrea, Caleb, Seth, Mike Jr, Madi, Lindsey, Keisha, eight great grandchildren Eli, Ace, Kenzie, Max, Harley, Sutton, Brinley, and Emersyn. Marilyn is preceded in death by her parents and one brother Charles Roberson Jr. . Services will be held 2:00 p.m., Friday, November 25, 2016 at Ulmer Funeral Home. Burial will follow at Park Cemetery. Arrangements are under the direction of Ulmer Funeral Home.

Marilyn Berry, 77, passed away November 20, 2016 at her home in Joplin, Missouri. Marilyn was born in Shattuck, OK to Charles Roberson and Fern Bishop Roberson November 26, 1938. She was a longtime Joplin resident. Everyone that knew Marilyn... View Obituary & Service Information

The family of Marilyn Berry created this Life Tributes page to make it easy to share your memories.