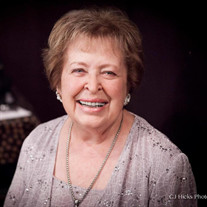 Marjorie Jean Jenkins Rogler, 86, of Carthage, MO passed away Tuesday, December 1, 2020, peacefully in her home surrounded by her loving family due to a massive stroke caused by COVID-19. Marge was the wife of Thomas Rogler, whom she married in Carthage in September 2012. She was born April 18, 1934 in Morrisonville, IL, to the late Samuel and Lela Rathgeber Jenkins. Marge graduated from Morrisonville School District No. 1 at Morrisonville in 1951 where she participated in FHA, band, drama and chorus. She held many elected class officer positions throughout high school including president, vice president, treasurer and parliamentarian preparing her for her future career. She was a member of staff for the school yearbook and library. Marge's considered her first "real" job to be at the Taxpayer's Federation of Illinois which began her lifelong interest in politics. She held an insurance license and worked in the industry for eight years before finding the perfect job at Carthage Water and Electric Plant where she began as an Office Manager and retired early as the Business Manager in 1999 to take care of a terminally ill family member. After this special person passed away, she decided to seek a second career at Southwest Missouri Bank working with senior lifestyles in the Trust Department. She finally "retired" in 2010. She always loved to work. She learned to love work on her family farm where she participated in all of the regular farm chores plus advancing in 4-H at the local and state levels. If you knew Marge, you knew she loved to stay busy by volunteering. She volunteered for years in the Silver Haired Legislature promoting conscientious legislative advocacy for Missouri's older adults. She has served on boards of the Carthage Chamber of Commerce, the Salvation Army, the United Way of Carthage, St. Luke's Nursing Center and the Carthage Community Foundation. She was honored and awarded the Lion's Club Citizen of the Year, Missouri Public Utility Alliance Achievement Award, Athena Award (1994) from the Carthage Chamber of Commerce, Woman of Distinction by the Joplin Business Journal (2008), Grand Marshall of the Maple Leaf Parade (2008), two United Way awards for Outstanding Community Service (2006 & 2011), recognized with a Resolution by the Missouri House of Representatives and the State of Missouri Senate as the Carthage Chamber of Commerce Citizen of the Year (2011). Marge was also an active life member of Soroptimist International of Carthage, and always the first to volunteer, manning the door at their big fundraisers. Marge was a member of First United Methodist Church where she was a past treasurer. She was an avid art collector of all mediums including paintings, carvings, clocks, literature, cookie jars and Christmas ornaments. Those left to cherish her memory include two sons, Steve Ebe (Tamara Respess-Ebe) of Nashville, Tennessee, and Daniel Ebe of Wichita, Kansas; one grandson, Samuel Ebe of Nashville, one sister, Helen Jenkins Beckmier of Taylorville, Illinois, a host of nieces and nephews. She was also treasured by her stepchildren Clint Housh (April) of Ridgecrest, California, Susan Housh Slade of Naperville, Illinois, Kathy Rogler Fritts (Drew) of Carthage, Greg Rogler of Carthage and Jeff Rogler (Shala) of Kansas City, Missouri. In addition to her parents, Marge was preceded in death by her stepmother, Ruby Stillwagon Jenkins, the father of her two sons, Dwight Ebe and her second husband Henry "Bo" Housh II; siblings, Ray Jenkins and Lorraine Jenkins Martin and stepson Todd Housh. The family will not have funeral services due to the pandemic, but hopes to have a celebration of her life in 2021.Cremation is under the direction of Ulmer Funeral Home. In keeping with the aforementioned clock collecting and Marge's pragmatic planning, her ashes will be divided amongst her two sons and placed in small clocks to adorn their homes forevermore. In lieu of flowers, please give generously to First United Methodist Church, 617 S. Main St. Carthage, MO 64836 or Carthage Area United Way, Inc., 616 W. Centennial Ave, Carthage, MO 64836

Marjorie Jean Jenkins Rogler, 86, of Carthage, MO passed away Tuesday, December 1, 2020, peacefully in her home surrounded by her loving family due to a massive stroke caused by COVID-19. Marge was the wife of Thomas Rogler, whom she married... View Obituary & Service Information

The family of Marjorie Jean Jenkins-Rogler created this Life Tributes page to make it easy to share your memories.