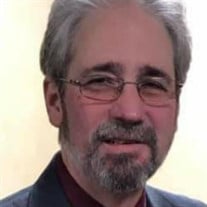 Marlow Priem, 58, of Carthage, Missouri passed away on Saturday, August 7, 2021 at Mercy Jefferson Hospital in Festus, Missouri. Marlow was born on May 10, 1963 to Delano Priem and Darlene “Cluckey” Priem in Waukesha, Wisconsin. Marlow moved to Carthage from Perham, Minnesota and has lived here for 29 years. He was a superintendent at Butterball and was a member of St. Ann’s Catholic Church. Marlow really enjoyed grilling outdoors, hunting, camping, farming, working on his truck, and if the grandkids had any projects they wanted to work on, he was right there helping them get it done. Marlow was joined in marriage by Joan Ruther on February 5, 1983 in Perham, Minnesota; she survives. Marlow is survived by his wife Joan, two sons Jacob Priem and wife Jamie of Pierce City, Missouri and Joshua Priem of Carthage, Missouri; two daughters Taria Smith and husband Keith of Carthage, Missouri and Victoria Lewis and husband Matt of Lamar, Missouri; nine grandchildren Alexis Smith, Brooklyn Smith, Alyssa Smith, Destenie Smith, Elliott Priem, Everitt Priem, Easton Priem, Rashae Priem, and Rylee Lewis; one brother Marvin Priem and wife Pam of Moorehead, Minnesota; and one sister Margo Rogers and husband John of Fargo, North Dakota. Marlow is preceded in death by his parents Delano and Darlene Priem, and one brother Marlyn Priem. Services for Marlow will be held at 10:00 a.m. Saturday, August 14, 2021. A visitation will be held the night before from 5 to 6 p.m. on Friday, August 13, 2021. The burial will be at Fasken Cemetery in Carthage, Missouri. Online condolences may be made at www.ulmerfh.com. Arrangements are under the direction of Ulmer Funeral Home.

Marlow Priem, 58, of Carthage, Missouri passed away on Saturday, August 7, 2021 at Mercy Jefferson Hospital in Festus, Missouri. Marlow was born on May 10, 1963 to Delano Priem and Darlene &#8220;Cluckey&#8221; Priem in Waukesha, Wisconsin.... View Obituary & Service Information

The family of Marlow Priem created this Life Tributes page to make it easy to share your memories.

Marlow Priem, 58, of Carthage, Missouri passed away on Saturday,...