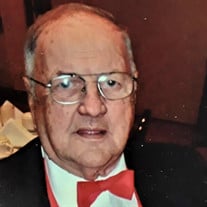 Marvin W. Frost, 84, passed away Tuesday, October 27, 2020 at Carthage Health & Rehab. Marvin was born May 22, 1936 in Carthage to Walter and Nellie “Turner” Frost. He was a lifetime resident of Carthage, served in the United States Army in Germany for two years, worked at Atlas / ICI for over 40 years, sold insurance for Jasper County Mutual and was a bus driver for the Carthage R9 School District. Marvin was actively involved in the Carthage Masonic Lodge #197 AM/FM, he was a Past Patron of Eminence Chapter #93 Order of the Eastern Star, a Past Supreme Royal Patron of the Order of the Amaranth, a Past Royal Patron of Praying Hands Court #15 Order of the Amaranth in Webb City, a Past Grand Commander of Commandry of the York Rite of Joplin and Carthage, a member KCCH of Scottish Rite in Joplin, a Past Watchman of Shepherds of the Azotus Shrine #5 White Shrine of Jerusalem of Joplin, and a member of the Abou Ben Adham Shriners in Springfield. He was a long time member of Mt. Moriah Methodist Church in Carthage. Marvin was united in marriage to Dottie LeMasters on August 10, 1958 at Mt. Moriah Methodist Church; she preceded him in death on January 5, 2018. Marvin is survived by one son, Randy Frost (Sharon) of Carthage; one daughter, Jan Johnson of Carthage; two sisters, Carolyn Johannes of Carthage and Dorothy Shull of Carthage; five grandchildren, Peter Frost, Kelsey Webb (Nathan), Jennifer Nord (Nathaniel), Steven Juris (Britney) and Amber Lombard (Caleb); 11 great grandchildren, Elijah, Hailey, Jazzi, Kaimen, Kassius, Russell, Kastiel, Harrison, Tucker, Ireland and Kodi, with one on the way. Marvin was preceded in death by one brother, Lawrence Frost; two sisters, Ellen Wilson and Lucille Timms. Visitation will be held from 6:00 p.m. to 7:00 p.m. on Friday, October 30, 2020 at Ulmer Funeral Home, with Masonic Rites beginning at 6:00 p.m. Funeral services will be held at 2:00 p.m. on Saturday, October 31, 2020 at Ulmer Funeral Home, beginning with the Amaranth Funeral Service. Burial will follow at Paradise Cemetery in Jasper. Memorial contributions may be made to Mt. Moriah Methodist Church or Amaranth Diabetes Foundation in care of Ulmer Funeral Home. Online condolences may be made at www.ulmerfh.com. Arrangements are under the direction of Ulmer Funeral Home.

The family of Marvin W. Frost created this Life Tributes page to make it easy to share your memories.