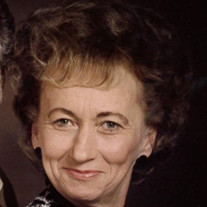 Mary E. Blackwell, 75, passed away Thursday, April 13, 2017 at her home. Mary was born May 11, 1941 in Stanton, Virginia to William H. Hicklin and Florence “Phillips” Hicklin. She was an accountant, worked at Judy’s Café in Jasper and was a member of the Nazarene Church in Carthage. Mary was united in marriage to Glenn Blackwell in May 1972 in Stanton, Virginia; he preceded her in death on September 5, 2011. Mary is survived by three daughters: Sherrie Taffner of Carthage, Sarah Shelton and husband Josh of Tacoma, Washington, and Lisa Blackwell, three sons: Bobby Blackwell of Mindenmines, Missouri, Glenn Blackwell, Jr. and wife Beth and Kevin Blackwell, both of Carthage. She is also survived by one sister, Thelma Hoover of McDonald County, Virginia, as well as several grandchildren and great grandchildren. Services will be held 2:00 p.m. Tuesday, April 18, 2017 at Ulmer Funeral Home. Visitation will be from 5:00 p.m. to 7:00 p.m. Monday, April 17, 2017 at Ulmer Funeral Home. Burial will be in Oak Hill Cemetery in Carthage. Arrangements are under the direction of Ulmer Funeral Home.

The family of Mary E. Blackwell created this Life Tributes page to make it easy to share your memories.