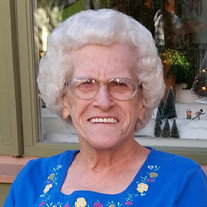 Mary Louise Hilton, 83, passed away February 10, 2018 at Mercy Hospital in Joplin. Mary was born November 1, 1934 in Bartlesville, Oklahoma to John T. Shirley, Jr. and LaVassa L. “LaPrade” Shirley. She was a resident of Southwest Missouri since 1952. Mary was a homemaker and was employed by S.H. Kress for ten years and Fox Deluxe Foods for eight years. Mary was united in marriage to Thurman Doyle Hilton on April 17, 1955 in Ava, Missouri; he preceded her in death May 23, 2016. They were active members of the VFW in Carthage. Mary is survived by her son, Steve Hilton (Krista) of Milton, Florida; two daughters, Nancy Day (Steve) of Red Oak, Texas and Linda Hammond (Jim) of Carthage; one sister, Margaret Gerard of Carthage; one brother, John Shirley III of Tahlequah, Oklahoma; 10 grandchildren, 27 great grandchildren and one great-great grandson. Mary was preceded in death by her parents, her husband, one brother, Robert Shirley, and one sister, Connie Sanders. Services will be held at 10:00 a.m. Friday, February 16, 2018 at Ulmer Funeral Home, with a visitation to follow from 10:30 a.m. to noon. A private burial will be held at Park Cemetery. Contributions may be made to the VFW Post #2590 Auxiliary in care of Ulmer Funeral Home. Online condolences may be made at www.ulmerfh.com. Arrangements are under the direction of Ulmer Funeral Home.

The family of Mary Louise Hilton created this Life Tributes page to make it easy to share your memories.