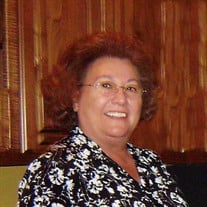 Mary Bess Matthews, 80, passed away September 15, 2019 in Carthage, MO. Mary was born September 29, 1938 in Edgar, TX. When Mary was a young adult, she moved to Carthage on a whim, got a job at Whistler’s Hamburgers and met her husband Donald. Mary went to work at Mercy McCune Brooks Hospital and retired from there. She attended the First Christian Church of Grove, OK with her family. Mary greeted everyone with a friendly smile and loved spending time with people, her friends, her family, and especially her grandchildren. She enjoyed the outdoors, traveling, art, painting, and playing and winning the Carthage Press football picking contest. Mary was united in marriage to Donald Lee Matthews on April 14, 1962 in Orlando, FL; he preceded her in death on December 19, 1989. Mary is survived by one son, Scott Matthews and wife Teresa of Carthage; two grandchildren, Brian Lee Matthews and wife Tabitha of Kansas City and Lauren Marie Matthews of Dallas, TX; one sister, Bernice Anzaldua and husband Robert of Rosenberg, TX; one sister-in-law, Lorrie Blaskey of Dayton, TX, along with several nieces and nephews. Mary is preceded in death by her parents, Victor F. and Bess B. “Haba” Blaschke; two brothers, Carl Blaskey and Harvey Blaskey; and one infant sister, Elveria Lee Blaschke. Services will be held at 11:00 a.m. Friday, September 20, 2019 at Ulmer Funeral Home in Carthage. Visitation will be held from 7:00 p.m. to 8:00 p.m. Thursday, September 19, 2019 at Ulmer Funeral Home. Burial will be at Park Cemetery in Carthage. Contributions may be made to the American Cancer Society in care of Ulmer Funeral Home. Online condolences may be made at www.ulmerfh.com. Arrangements are under the direction of Ulmer Funeral Home.

Mary Bess Matthews, 80, passed away September 15, 2019 in Carthage, MO. Mary was born September 29, 1938 in Edgar, TX. When Mary was a young adult, she moved to Carthage on a whim, got a job at Whistler&#8217;s Hamburgers and met her husband... View Obituary & Service Information

The family of Mary Bess Matthews created this Life Tributes page to make it easy to share your memories.