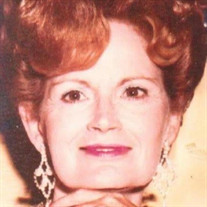 On Sunday, August 30, 2020, Mary Jane (Coady) York, loving mother of six children and many grandchildren went to sleep in the arms of her adoring children and woke up in the arms of her Heavenly Father. Mary Jane was born October 5, 1933 in Carthage, MO to John and Jackie Coady. She fulfilled her lifelong dream of becoming a nurse and loved working with newborn babies. She was married to Lester York and they had 27 wonderful years together on the family farm and later at the lake house until he was called to Heaven March 31, 2015. Mary Jane raised two daughters, Ruth and Jonna, and four sons, Steven, Michael, David and Kelly. Mary Jane was a one of a kind lady, she could bring out the fiery red headed, Irish girl in her, but most of all she was one of the most loving people to ever walk on God's beautiful masterpiece. Anyone who went to see her was sure to get a hug and a kiss and, when they left, they were guaranteed a hug, a kiss and an I love you. She had a passion for collecting Angels and felt they brought her piece and comfort. Mary Jane was the last of the original Coady Clan. She was preceded in death by her father, John and mother, Jackie; one son, Steven; three brothers and four sisters. Mary Jane is survived by Ruth Ann and Lonnie Knight Sr. of Baxter Springs KS, Mike and Debbie Quick of Joplin, Jonna and Carl Short of Carthage, David and Christie Quick of Carl Junction, Kelly and Megan Quick of Ozark, along with numerous grandchildren, great grandchildren and great-great grandchildren. Services will be held 2:00 p.m. Thursday, September 3, 2020 at Ulmer Funeral Home. Burial will be at Park Cemetery. Contributions may be made to the Golden Paws or the Humane Society in care of Ulmer Funeral Home. Online condolences may be made at www.ulmerfh.com. Arrangements are under the direction of Ulmer Funeral Home.

The family of Mary Jane "Coady" York created this Life Tributes page to make it easy to share your memories.