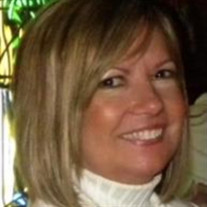 Melissa Gay “Missy” Gier of Carthage, Missouri, passed away on Wednesday, September 16, 2021, after a long battle with dementia, at the age of 61. Missy was born March 11, 1960 in Marshfield, Missouri, to John Ronald “Ronnie” Tracy and Mary Margret (Rader) Tracy. On May 21, 1983, Missy was united in marriage to Mark Gier in Marshfield, Missouri, after an 18-month courtship and the removal of her blind-date blindfold. Missy loved being a homemaker, including children, decorating, entertaining large groups of friends with a, “The more the merrier” approach and spending time at her “Happy Place” on the lake at Shell Knob. Missy is survived by her husband, Mark, of the home, daugters: Lauren Benton (Brad) and (grandbaby on the way) of Round Rock, Texas and Jordyn Gier (Fiancee Blake Moreland) of Harrisonville, Missouri, her father, Ronnie Tracy, Marshfield, sisters: Menlanie Webb (Buddy) of Marshfield and Mindy Thompson (Chip) of Marshfield, numerous aunts, uncles, cousins and nephews, a vast list of friends that Missy affectionately called, her “Peoples”, and her biggest fan for the last 13 years, her Maltese, Hazel. Missy was preceded in death by her mother, Mary Tracy, an infant younger brother, Shane Tracy, a sister, Myra Shade, a niece, Madeline Webb, and a nephew, Stevon Shade. The family would like to thank friends and family who supported Missy and the family on this journey. Special thanks to angels, Tammy Starchman and Mechele Timmons, who provided incredible love and care 24/7 for her these last several months. We would also like to thank the great team of nurses and staff at Compassus Hospice of Monett. Donations in memory of Missy Gier may be made to the Alzheimer’s Association, in care of Ulmer Funeral Home. A visitation is scheduled from 12:30 to 2:00 p.m. on Saturday, September 18, 2021 at Ulmer Funeral Home, Carthage, Missouri followed by a service. Chaplain Johnnie Adkins officiating. Online condolences may be made at www.ulmerfh.com. Arrangements are under the direction of Ulmer Funeral Home.

The family of Melissa Gay Gier created this Life Tributes page to make it easy to share your memories.

Melissa Gay “Missy” Gier of Carthage, Missouri, passed away on...