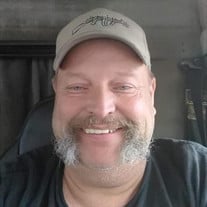 Michael “Mike” David Pierce, 60, passed away on Thursday, February 3, 2022, in Olathe, Kansas. Mike was born on July 28, 1961 in Carthage, Missouri to David Pierce and Betty “Rush” Pierce. Mike was a lifetime Jasper County resident. He was a truck driver for Frontier Leasing the last two years and owned and operated Pierce Trucking for several years prior to that. He was an avid fan of Nascar and dirt track racing, the St. Louis Cardinals, the Denver Broncos, and Mizzou Tigers. Mike was united in marriage to Sharon Welch on June 25. 2021 in Miami, Oklahoma; she survives. Mike is survived by his wife, Sharon Pierce; mother, Betty Rush; two sisters, Debbie Moore of Joplin, Sherry Pierce of Carthage; three nieces, Christina Moore of Inman, South Carolina, Chelsea Comer of Joplin, and Ciara Carrol of San Antonio, Texas; two great-nieces Elaina Carroll and Brenley Comer; one great-nephew Brexton Comer; one grandson Konner Pittman; and his two beloved cats, Sunny and Tiger. He is preceded in death by his father, David Pierce. Services will be held 6:00 p.m., Thursday, February 10, 2022 at First Church of the Nazarene in Carthage, Missouri. Online condolences may be made at www.ulmerfh.com. Arrangements are under the direction of Ulmer Funeral Home.

The family of Michael "Mike" David Pierce created this Life Tributes page to make it easy to share your memories.