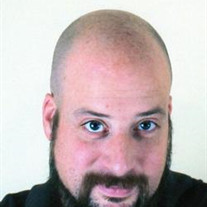 Michael Alan "Mike" Richardson was a father, son, friend, athlete, musician, grillmaster, jokester, wanderer and philosopher. He had an eclectic taste in music, was an avid St. Louis Cardinals, Kansas City Chiefs, and Mizzou fan. He never met a stranger and could make anyone laugh, even through the darkest of times. His life was taken on November 11, 2016, in Louisville, KY. Mike was born August 8, 1981 in Carthage. He attended Carthage Schools and was a member of the Carthage Senior High School graduating class of 2000. He later attended Central Methodist College on a football scholarship and Missouri Southern State University. Mike was a three-year varsity defensive lineman and center for the CSHS Tiger football team and was team co-captain his senior year. He was recognized as an All Area lineman and played in the Lions Club All-Star game in Jefferson City. Mike was also a gifted musician. He played the trumpet in the CSHS jazz, marching, and concert bands. He received multiple "I" ratings in music competitions and was a repeat member of District Honor Band. He joined the U.S. Army in 2004. Mike was a tank operator in the 1st Armored Division and achieved the rank of SPC E-4. He was stationed in Budingen, Germany and Fort Knox, KY. He took advantage of his time in Germany by traveling extensively around Europe while on leave. Mike was a talented chef and practiced his craft in several Louisville restaurants. He studied at Sullivan University's Culinary Arts Program, but most of all, he loved cooking for his family and friends. He loved re-creating family recipes and adding his own special twist. His specialty was grilling and smoking a wide variety of meats, including goat and alligator. Mike's children were the light of his life. He is survived by his son Brock Alan Richardson of Carthage, daughter Erica Denise Richardson of Louisville, his father Bruce Richardson and stepmother Peggy of Carthage, mother Jennifer Blase Seaton and stepfather Phil of Lee's Summit, MO, and a vast number of friends across the country. Services will be held at 10:00 a.m. Friday, November 18, 2016 at Ulmer Funeral Home Chapel. Visitation will be held from 6:00 p.m. to 7:00 p.m. Thursday, November 17 at Ulmer Funeral Home. Burial will be at Park Cemetery. Online condolences may be made at www.ulmerfh.com. Memorial contributions may be made to the Freeman Health System NICU or the Carthage Tiger Booster Club in care of Ulmer Funeral Home. Arrangements are under the direction of Ulmer Funeral Home.

The family of Michael Alan "Mike" Richardson created this Life Tributes page to make it easy to share your memories.