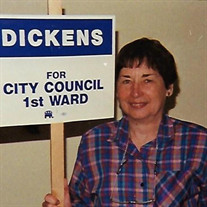 Norma “Dalton” Dickens, 93, passed away Wednesday, June 17, 2020 at her home in Carthage. Norma was born April 1, 1927 in Rush Springs, OK to H.L. and Sarah Elizabeth “Wilson” Dalton. She was raised in Carthage, lived in several locations, then returned to Carthage in 1985 from Lincoln, NE to care for her elderly parents. Norma graduated valedictorian from Carthage High School Class of 1945. She worked with the League of Women Voters in San Antonio, TX and served as their treasurer. Norma was united in marriage to Claude Dickens, Jr. on December 23, 1947 in Springfield, MO; he preceded her in death on June 3, 2002. Norma is survived by one son, Steve Dickens (Cindy) of Joplin; one daughter, Ann Elizabeth Dickens-Clardy (Robert) of Bellevue, WA; one sister, Pat Bennett of Albuquerque, NM and one daughter-in-law, Margaret Hallock of Eugene, OR; five grandchildren, Lily (Courtney), Jay, Chris (Chrystie), Derek (Martha),and Brandon, as well as three great grandchildren. Norma was preceded in death by one son, David Dickens in December 2016. Per Norma’s wishes, no services are planned at this time. Online condolences may be made at www.ulmerfh.com. Arrangements are under the direction of Ulmer Funeral Home.

The family of Norma "Dalton" Dickens created this Life Tributes page to make it easy to share your memories.