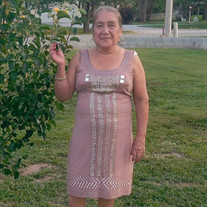 Olga Barrios Cardona, 71, passed away Wednesday, January 20, 2021 at Via Christi Hospital in Pittsburg, KS. Olga was born September 4, 1949 in San Vicente, Guatemala to Mario-de Jesus Barrios and Anita Cardona. She was a Carthage resident and homemaker. Ogla was united in marriage to Neftali Gutierrez Lopez in Guatemala; he survives. She is also survived by six daughters, Odilia Barrios, Mercedes Gonzalez, Concepcion Gonzalez, Jeimi Gonzalez, Olga Gonzalez, all of Carthage, and Mariela Gonzalez of Guatemala; two sons, German Gonzalez of Carthage and Sergio Gonzales of Guatemala; three sisters, Teresa Barrios, Rosa Barrios and Arjelia Barrios of Guatemala; one brother, Remijio Barrios of Guatemala; 43 grandchildren and 23 great grandchildren. A visitation was held from 11:00 a.m. to 11:00 p.m. on Saturday, January 30, 2021 at Ebenezer Church, 2048 Suburban St., Carthage, MO. Graveside services will be held at 2:00 p.m. on Tuesday, February 23, 2021 at Park Cemetery in Carthage. Online condolences may be made at www.ulmerfh.com. Arrangements are under the direction of Ulmer Funeral Home.

The family of Olga Barrios Cardona created this Life Tributes page to make it easy to share your memories.