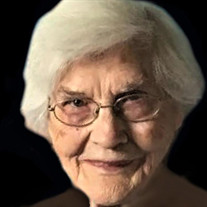 Pauline B. “Russow” Denayer, 96, passed away August 28, 2018 at St. Luke’s in Carthage. Pauline was born November 6, 1921 in Bentonville, AR to Daniel and Sally Belle “Ford” Russow. Pauline recently lived in Webb City, but was a longtime resident of Carthage, and a homemaker. She was a member of Kendricktown Methodist Church and loved sewing, gardening, crafts and reading. Pauline was united in marriage to Virgel Denayer on August 12, 1963 at Carthage First Christian Church; he preceded her in death November 7, 2010. Pauline is survived by three sons, Dale Hamilton (Marie) and Roy Hamilton, both of Carthage and David Chrisman of Joplin; five daughters, Kathryn Smith (Don) of Carthage, Donna Baker (Wayne) of Carterville, Phyllis Talley of Carthage, Barbara Hunziker (Greg) of Joplin and Connie Chrisman of Joplin. She is also survived by many grandchildren, great grandchildren and great-great grandchildren. Pauline was preceded in death by two daughters, Carolyn Brewer and Susie Nally; four brothers, her twin Paul Russow, Charles Russow, John Russow and Obie Russow; five sisters, twins Mary Pendergraft and Martha Davis, Rosie Daron, Gladys Brooks, Dorothy Clark, Cindy Schribner and Elva Fansler (a twin of Obie). Visitation will be held from 5:00 p.m. to 6:00 p.m. Wednesday, August 29, 2018 at Ulmer Funeral Home. Services will be held at 2:00 p.m. Thursday, August 30, 2018 at Ulmer Funeral Home. Burial will be at Oak Hill Cemetery in Carthage. Contributions may be made to the Kendricktown Methodist Church in care of Ulmer Funeral Home. Online condolences may be made at www.ulmerfh.com. Arrangements are under the direction of Ulmer Funeral Home.

The family of Pauline "Russow" Denayer created this Life Tributes page to make it easy to share your memories.