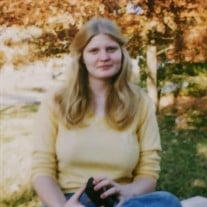 Peggy S. Stanley, 59, of Carthage, Missouri passed away on Saturday, August 7, 2021. Peggy was born on June 22, 1962 to Jack C. Kelly and Margaret Alice “Noland” Kelly in Neosho, Missouri. Peggy was an Army wife who stayed home to raise her children. When Peggy rejoined the workforce she was employed at Butterball for a brief period, then moved over to Walmart, where she worked for 14 years. She attended the Baptist Church in Goodman, Missouri. She was a beloved wife, mother, and grandmother who really enjoyed gardening and spending time with her grandchildren. Peggy was united in marriage with Bobby J. Stanley on April 19, 1979 in Neosho, Missouri; he survives. They celebrated their 42nd Wedding Anniversary this year. Along with her husband Bobby, Peggy is survived by two sons Kyle J. Stanley and Daniel A. Stanley; two daughters Stacy S. Browder and Lori N. Goodwin and husband, Travis; six grandchildren Taylor Browder, Allan Estis, Nicholas Goodwin, Alex Goodwin, Emma Goodwin, and Lexie Goodwin; one sister Melissa Baines and husband, Bruce; one niece, Carissa Hudgins and husband, Landon; and one nephew, Tavis Stanley. Peggy was preceded in death by her father Jack C. Kelly. Services for Peggy will be held at 10:00 a.m. on Thursday, August 12, 2021 at Ulmer Funeral Home. A visitation will be held the night before from 6:00 to 7:00 p.m. on Wednesday, August 11, 2021. The burial will be at Hackney Cemetery in Carthage. Online condolences may be made at www.ulmerfh.com. Arrangements are under the direction of Ulmer Funeral Home.

The family of Peggy S. Stanley created this Life Tributes page to make it easy to share your memories.

Peggy S. Stanley, 59, of Carthage, Missouri passed away on Saturday,...