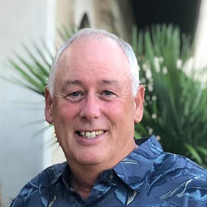 Dr. Richard Behrend, 66, passed away December 20, 2019 at his home in Carthage. Richard was born November 22, 1953 in Mount Gilead, OH to Richard and Delores “Blose” Behrend. He resided several years in the Jasper and Lamar area, then moved to Carthage a year ago. He was a chiropractor and a member of the American Chiropractic Association. Richard attended the Full Faith Christian Church in Carthage, but currently was a member of Grace Pointe Assembly of God in Carthage. Richard is survived by three sons, M.G. Behrend (Jana) of St. Robert, MO, Matt Behrend (Bonni) of Fayetteville, AR and John Behrend (Kelly) of Oklahoma City, OK; two brothers, Michel Behrend (Sheila) of Eastampton, NJ and Jeff Behrend (Angela) of Zion Crossroads, VA; one sister, Bonnie Behrend of New York State; and five grandchildren, Jolie, Emery, James, Alex and Zain. A celebration of life will be held at 3:00 p.m. Saturday, December 28, 2019 at Grace Point Assembly of God. In lieu of flowers, contributions may be made to Grace Point Assembly of God in care of Ulmer Funeral Home or online directly to the church at www.gracepointeag.org and use fund Dr. Behrend. Condolences may be made at www.ulmerfh.com. Arrangements are under the direction of Ulmer Funeral Home.

The family of Dr. Richard Behrend created this Life Tributes page to make it easy to share your memories.