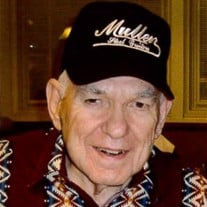 Richard L. Metsker passed from this earthly home to his eternal home early on Sunday, July 16, 2017. Richard was born to Glenn and Violet “Dubry” Metsker September 10, 1937. He was a lifetime Carthage resident, graduated from Carthage High School and attended a technical school to become a machinist. During grade school, he took guitar and steel guitar lessons from Mr. Maples. He would give mini-performances at the local schools. Mrs. Metsker didn’t drive, but his Aunt Emma and Aunt Kathryn took care of his church and music needs. He was a cross-guard patrol in grade school and a paperboy for years. In fact, he was the only carrier to carry his papers by car. He purchased a 1941 Ford Coupe and said he could put that paper on the porch for those customers at their request. He and his cousin, Kenny Adams, painted that car with paint brushes. Richard served his church, community and his country. He was drafted and served four years in Korea. Since he’d had four years of ROTC training, he was promoted to captain in six months. He was wounded in combat and received the Purple Heart, along with several other medals. Richard was employed by Juvenile Shoe Factory in Sarcoxie, Carthage Water and Electric and Empire District Electric, from which he retired. Richard was a member of the Masons Lodges 197, 31, 41,and 61. And, he received his 50 year pin. One of his greatest experiences was when he joined the Buck Owens Band and traveled with them for several years and played at Carnegie Hall. Richard was united in marriage to Wilma Lambeth. They celebrated 32 years as of May, 2017; she survives. Richard is also survived by four step-children: Donna Bryant (Jerry), Dan Lambeth (Mary Pat), Doug Lambeth (Mary Ann) and Dale Lambeth, along with several grandchildren and great grandchildren. Thanks to our family, friends and neighbors for their support and care. Visitation will be held from 6:00 p.m. to 7:00 p.m. Wednesday, July 19, 2017 at Ulmer Funeral Home. Funeral Services will be held at 10:00 a.m. Thursday, July 20, 2017 at Ulmer Funeral Home. Burial will be at Park Cemetery in Carthage. Contributions may be made to Parkinson's Association in care of Ulmer Funeral Home. Arrangements are under the direction of Ulmer Funeral Home.

Richard L. Metsker passed from this earthly home to his eternal home early on Sunday, July 16, 2017. Richard was born to Glenn and Violet &#8220;Dubry&#8221; Metsker September 10, 1937. He was a lifetime Carthage resident, graduated from Carthage... View Obituary & Service Information

The family of Richard L. Metsker created this Life Tributes page to make it easy to share your memories.

Richard L. Metsker passed from this earthly home to his eternal...