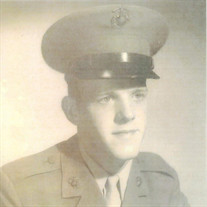 Richard Eugene Williams, 74, passed away on Monday, August 30th in his home surrounded by family. He was born March 25th, 1947 in Joplin, Missouri. Richard was a longtime resident of Carthage, Missouri. Over the years he worked at Krtek Lumber and Carthage R-9 School District in the maintenance department, from which he retired in 2008. Richard proudly served in the United States Marines from 1967 to 1971 as a Lance Corporal. Although he had orders to go to Vietnam, he ended up in Hawaii instead. He enjoyed camping and fishing at Roaring River State Park, attending Arkansas Razorback football games (especially to watch his daughter in halftime shows), picking up hay for his daughter’s horses, spending time with his family (who loved him very much), and being an all-around jokester and comedian. Richard was an amazing and loving husband, father, brother, grandfather and friend. He could strike up a conversation with anybody and was very loved by all who knew him. Richard was united in marriage to Linda K. Morris on August 9th, 1967 in Carthage, MO. Richard is survived by his wife, Linda Williams of Carthage; daughter, Jennifer Williams-Cundiff and spouse, Cary Cundiff of Carthage, Missouri; son, Rick Williams of Joplin, Missouri; daughter, Melinda Williams and partner, Johnny Miskiel of Springdale, Arkansas; daughter, Corie Williams of Joplin, Missouri. His grandchildren include grandsons, Logan Grant and Taylor Grant, Cody Cundiff, Thomas Hutchins, granddaughters, Olivia and Melodye Williams and Chassidy Congleton. Richard’s siblings include sister, Margaret Williams-Dehn (Pat) of Evansdale, Iowa; and brother, Marion “Bugs” Williams (Beverly) of Houston, Texas, along with many nieces, nephews and friends. Richard is preceded in death by father, Marion Williams, mother, Lefa Williams, brothers, Jimmy Williams and Jay Williams, sister, Betty Madison, and Aunt Sissi and Uncle Albert.

Richard Eugene Williams, 74, passed away on Monday, August 30th in his home surrounded by family. He was born March 25th, 1947 in Joplin, Missouri. Richard was a longtime resident of Carthage, Missouri. Over the years he worked at Krtek Lumber... View Obituary & Service Information

The family of Richard Eugene Williams created this Life Tributes page to make it easy to share your memories.