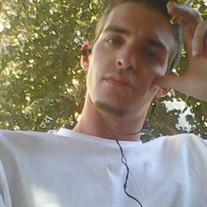 River Edward Gene Vaughn passed away on May 12, 2021 in Springfield MO. He was born in Joplin MO on July 22, 1989 to Michael and Tina Vaughn. River is survived by his parents Michael Vaughn, Columbus KS and Tina (Dale) White, Ozark MO. Daughters Emma Vaughn and Audree Tiegs, Carthage MO. Sisters Dana Little, Webb City MO, Stacey (Ben) Hamilton, Joplin MO and Storm (Donnie) Snyder, Columbus KS. Grandparents Don (Lois) Greninger, Payne OH and Athena Hart, Hamilton GA. A multitude of aunts, uncles, nieces, nephews, cousins and friends. Grandparents Marvin and Juanita Vaughn and brother in law Heath Little preceded him in death. River could converse with anyone and he did! If you wanted to talk conspiracy theories, ancient aliens or the Kansas City Chiefs, he was your guy. He would spend hours talking about his “rambling thoughts” and then post videos on YouTube for all the world to see. River was always willing to answer a call, listen to your troubles and turn your bad day upside down with his irreverent and sassy comments. He would make sure to tell you that he loved you before he’d hang up. If you hung up prematurely before saying I love you back, just expect an immediate return call and you would hear him say “did you forget something”? The greatest joy in Rivers life were his girls, Emma and Audree. He was so proud of them. He would proudly show off pictures and videos of them to anyone he knew. River was especially close to all of his sisters. He was always there for them, as they were for him. Growing up as the only boy in a house full of girls would be tough for most but River used that to his advantage. He knew if he blamed one of them for something he’d done, mama would of course take his side against theirs. He had it made! Services will be held on Monday, May 17, 2021 at 2 pm at Ulmer Funeral Home, Carthage MO. Visitation will be prior to the service from 12 – 2 pm In lieu of flowers, memorial contributions can be made to CORE, 280 State Highway T, Branson MO 65616. If we have learned anything from River it would be to never “forget something”. Tell those that you love and care about that you love them!

River Edward Gene Vaughn passed away on May 12, 2021 in Springfield MO. He was born in Joplin MO on July 22, 1989 to Michael and Tina Vaughn. River is survived by his parents Michael Vaughn, Columbus KS and Tina (Dale) White, Ozark MO. Daughters... View Obituary & Service Information

The family of River Vaughn created this Life Tributes page to make it easy to share your memories.

River Edward Gene Vaughn passed away on May 12, 2021 in Springfield...