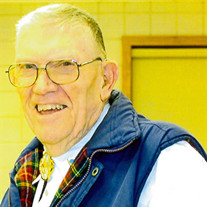 Robert Leslie Carr, 82, passed away March 6, 2018. Robert was born June 3, 1935 in Carthage, Missouri to Robert Leslie and Ruth Elizabeth “Haggard” Carr. He resided in Carthage until he entered the United States Army in 1952, serving in Korea until 1954. He completed his tour of duty at Ft. Sam Houston in San Antonio, TX. In 1957, he enlisted in the United States Navy and retired in 1959. Robert was united in marriage to Kay Smith in 1954 in Galena, MO. Together they had two children, Dwight and Sheryl. Robert was then united in marriage to Norma “Hale” Jessee on January 9, 1987. Robert is survived by his wife, Norma, of their home in Pittsburg, Kansas, along with step-daughter, Debra Bevins; two step-sons, Dean Jessee and Darrin Jessee; eight step-grandchildren, Matt Jessee, Julie Miller, Rob Bevins, Ryan Bevins, Lindsay Bevins, Bill Jessee, Autumn Roberts, and Derek Schultz, along with 14 step-great grandchildren. Robert is preceded in death by his son, Dwight, July 22, 2014. Robert was baptized in the Nazarene Church in 1950 in Spring River near Carthage. He was a member of the Forsyth Christian Church in Forsyth, MO. Visitation will be held from 12:30 p.m. to 1:30 p.m., Saturday, March 10, 2018 at Ulmer Funeral Home. Following the visitation, graveside services will be held at 2:00 p.m. at Oak Hill Cemetery in Carthage. In lieu of flowers, contributions may be made to the Ronald McDonald House or the (Masonic) Mirza Transportation Fund. Online condolences may be made at www.ulmerfh.com. Arrangements are under the direction of Ulmer Funeral Home.

The family of Robert Leslie Carr created this Life Tributes page to make it easy to share your memories.