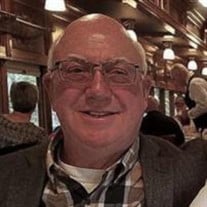 Robert “Chuck” Cole, 72, passed away shortly after 8:00 p.m., Tuesday, November 24, 2020 at Freeman Hospital in Joplin. Chuck was born May 20, 1948 to Everett and Rose Cole and graduated in the Class of 1967. He was a lifelong resident of Carthage. He worked for the Carthage Water & Electric for 30 years and at Ozark Electric Cooperative in Mount Vernon from where he retired. Chuck was united in marriage to Leanne Walbridge on November 18, 2006 in Eureka Springs, AR; she survives. Chuck is also survived by four sons, Michael Cole, Shawn Klinge and his wife, Donna, Shad Klinge, and James Keepper; one daughter, Lisa Stiles and her husband, Kip; two sisters, Mary Anna Babcock and Connie Jones and her husband Sam; twelve grandchildren, seven great-grandchildren, father-in-law and mother-in-law, Mel and Wilma Walbridge, along with many, many nieces and nephews, and a seemingly endless number of friends. Chuck is proceeded in death by his parents; one son, Edwin; four brothers, John, Lawrence, Richard, and Ronald; two sisters, Sherry Burlingame and Alice Kost. Some of Chuck’s passions in his life were his involvement with the Masonic Lodge, the Carthage Shrine Train Crew, a number of non-profit organizations in Carthage, and golf. In fact, he realized his lifelong dream of making a hole-in-one earlier this year at the Carthage Municipal Golf Course. And, of course, his greatest passion was his family. Which seems only fitting that some of his last words before leaving us were: “Tell everyone I love them.” The body has been taken for cremation, per Chuck’s wishes, and a celebration of life will be held at a later date. Memorial contributions may be made to St. Jude’s Children’s Hospital or Stone’s Throw Dinner Theater in care of Ulmer Funeral Home. Online condolences may be made at www.ulmerfh.com. Arrangements are under the direction of Ulmer Funeral Home.

The family of Robert "Chuck" Cole created this Life Tributes page to make it easy to share your memories.