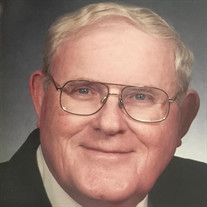 Robert J. Smith, 84, passed away Saturday, October 3, 2020 at Via Christi in Pittsburg, KS. Robert was born April 18, 1936 in Carthage to J.D. and Dorothy E. “Wolff” Smith. Upon Graduating from Carthage High School in 1954, he enlisted in the US Army serving in Okinawa, Japan for three years. After receiving degrees in education and history from SW Missouri State and Pittsburg State, he taught history classes at Webb City High School from 1960 to 1965. In 1965, Robert transitioned to a Federal Civil Service career working first with US Army human resources in St. Louis, then as an archivist at the Eisenhower Presidential Library in Abilene, KS. In 1967, he was employed as a historian in the United States Air Force history program until his retirement in 1993; his final position was as an Air Force Historian for field programs at Air Force history headquarters, the Pentagon. He was a member of the Church of Christ. Robert led singing, taught numerous Bible classes and served as a Deacon Elder. Robert was united in marriage to Nancy Jo Ledl on January 26, 1958 in Carthage; she survives. Robert is also survived by one son, David Robert Smith and wife Jan of Owasso, OK; one daughter, Cynthia Diane St. Louis and husband, David of Indianapolis, IN; seven grandchildren and four great grandchildren. He is also survived by one brother, Eugene Smith of Arlington, TX and one sister Marilynne Williams of Hempstead, TX. Graveside services will be held at 2:00 p.m. Friday, October 9, 2020 at Park Cemetery, with full military honors. In lieu of flowers, donations can be made to the African Christian Hospitals, Searcy, Arkansas, In Search of the Lord’s Way, Edmond, Oklahoma and The Church of Christ of Carthage, MO. Online condolences may be made at ww.ulmerfh.com. Arrangements are under the direction of Ulmer Funeral Home.

The family of Robert J. Smith created this Life Tributes page to make it easy to share your memories.