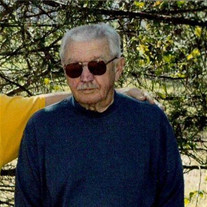 Roger Adams, 81, passed away Monday, December 16, 2019 at his home in Brooklyn Heights. Roger was born August 25, 1938 in Jasper County to Eugene R. and Maxine “Shaffer” Adams. He was a lifetime resident of the Carthage area, graduating from Carthage High School. He served in the United States Marine Corp and retired as a superintendent at Dyno-Nobel after 38 years. Roger was 33rd Degree Mason and a member of the Masonic Criterion #586 in Alba, the Scottish Rite in Joplin and the Scottish Rite Train Crew. He enjoyed carving figurines, taking motorcycle trips with his Retread Family and gardening. Holidays at the Adams’ were always filled with parked cars, grandchildren playing in the yard and enough food to feed an army. Roger dearly loved his family, had a heart for giving to those in need and was always willing to lend a helping hand. Roger was united in marriage to Betty “Burk” on December 8, 1958; she survives. Roger is also survived by one son, Roger E. (Butch) Adams and wife Jan of Carthage; two daughters, Pamela J. Livingston and husband Tim of Galena, KS, Rebekah (Becky) Adams-Ogle and husband Scott of Carthage; one brother, Stephen F. Adams; one sister, Carol Dillon; eight grandchildren and 13 great grandchildren. Roger was preceded in death by his son, Russel R. Adams, on August 2, 1980, and one sister, Rebekah Pfander. Graveside services will be held at 2:00 p.m. Saturday, January 4, 2020 at Curtis Cemetery, west of Carthage. Masonic Rites will be observed. Arrangements are under the direction of Ulmer Funeral Home.

Roger Adams, 81, passed away Monday, December 16, 2019 at his home in Brooklyn Heights. Roger was born August 25, 1938 in Jasper County to Eugene R. and Maxine &#8220;Shaffer&#8221; Adams. He was a lifetime resident of the Carthage area, graduating... View Obituary & Service Information

The family of Roger R. Adams created this Life Tributes page to make it easy to share your memories.