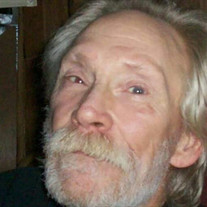 Ronald E. Baughn, 65, passed away Friday, November 3, 2017 at his home in Carthage, Missouri. Ronald was born September 21, 1952 in Holbrook, Arizona to Clarence Milton Baughn and Marion “Shellenberg” Baughn. Ronald was a long-time resident of Nevada, Missouri, but spent the last two years living in Carthage. He was a Vietnam Veteran in the United States Navy and worked as a sales associate at Tap-Jac Lumber for several years. Ronald is survived by one daughter, Sarah Balster (Pete) of Carthage; two sons, Terry Thomas (Julie) of Blum, Texas and William Blystone (Melissa) of Nevada, Missouri; one brother, Carl Baughn of Beebe, Arkansas; one sister, Darleena Orrison if Beebe, Arkansas; seven grandchildren: Tedie, Cody, Ty, Lexi, Bradley, Amanda and Kaleena; six great grandchildren, along with numerous nieces and nephews. Ronald was preceded in death by three brothers, Wayne, Clarence and Edward; one sister, Juanita. Memorial services will be held 2:00 p.m. Monday, November 13, 2017 at Ulmer Funeral Home Chapel. Contributions may be made to the Ronald Baughn Memorial Fund. Online condolences may be made at www.ulmerfh.com. Arrangements are under the direction of Ulmer Funeral Home.

The family of Ronald E. Baughn created this Life Tributes page to make it easy to share your memories.