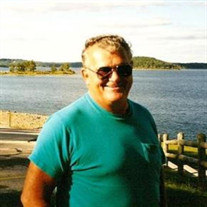 Ronald Eugene Denton, 82, passed away at his home in Carthage, Missouri on April 7th, 2021. Ronnie was born on January 4th, 1939 to Cecil and Wilma “Gertie” (Imel) Denton. Ronnie worked for Wheatland Electric in Garden City, Kansas he started as a janitor and worked his way up to a shift foreman. From there he worked with several different power and electric companies before retiring from the Utility Corporation in Great Bend, Kansas. Ronnie was a member of the Church of Jesus Christ of the Latter Day Saints. He was an avid fisherman and enjoyed watching football and basketball. He was a K.U., K-State, and K.C. Chiefs fan. Ronnie was joined in marriage to Lois Smith on January 22nd, 1976 in Cimarron, Kansas; she survives. He is survived by his wife, Lois; two sons Steve Denton (Lynda) of Kansas City, Missouri and Michael Denton (Indira) of San Antonio, Texas; four brothers Jack Denton (Glatha) of Dodge City, Kansas, Clovis Denton (Janette) of Garden City, Kansas, Robert Denton of North Carolina and Richard Denton(Cheryl) of Carthage MO.,one sister Darla Kopper(Loren) of Dodge City, Kansas;. Seven Grandchildren:Jeff,Malea,Mansul,Vaishali,Gitanjali,Avery and Sarah.four great-grandchildren. Ronnie was preceded in death by his parents; one son Rodney Denton (January 20, 2011); three brothers Duaine Denton, Vernon Denton, Donald Denton; and two sisters Sharon Smith, and Donna Denton. Services for Mr.Ronnie Denton will be held Saturday 2:00p.m. April 17,2021 at Ulmer Funeral Home Chapel. Visitation will be prior to services from 1:00p.m. till service time. Contributions may be made to The American Liver Foundation in care of Ulmer Funeral Home. Online condolences may be made at www.ulmerfh.com. Arrangements are under the direction of Ulmer Funeral Home.

The family of Ronald "Ronnie" Eugene Denton created this Life Tributes page to make it easy to share your memories.

Ronald Eugene Denton, 82, passed away at his home in Carthage,...