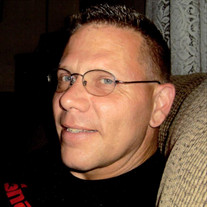 Russell Harmon, 57, of Carthage, Missouri passed away at 6:14 a.m. on Saturday, July 24, 2021 at Cox South Hospital in Springfield, Missouri. Russell was born to Leaford Greene and Trudy “Locke” Greene in Lamar, Missouri on August 27, 1963. He was a lifetime resident of Southwest Missouri. He worked as a mechanic for many years at Chad’s Garage in Carthage. Russell was a Mo-Kan Enthusiast and was very passionate about cars. He owned over 80 different vehicles in his lifetime, and could work on and fix anything with wheels. Russell was united in marriage to Anna Root on August 26, 1994 in Miami, Oklahoma; she survives. Along with his wife, Anna Harmon, Russell is survived by two sons Brandon Harmon of Avilla, Brett Spain and wife Heather of Carthage; two daughters Ashly Hunsaker and husband Rusty of Seneca, and Baelee Harmon and fiancée Justin Tandy of Carthage; one brother Shannon Greene of Carthage; one sister Julie Collings and husband Mark of Grove, Oklahoma; eight grandchildren Breeanna Spain, Connor Hunsaker, Owen Hunsaker, Isaac Spain, Sophie Hunsaker, Rhyder Harmon, William Spain, and Elise Hunsaker; several nieces and nephews; and a host of friends. Russell is preceded in death by his parents Leaford and Trudy Greene and his sister-in-law Shannon Witt. Services for Russell are scheduled for 10:00 AM Thursday, July 29, 2021 at the Ulmer Funeral Home Chapel. Burial will be at Fasken Cemetery. A visitation will be held the night before on Wednesday, July 28, 2021 from 6:00 to 7:00 PM. Contributions can be made to the Russell Harmon Memorial Fund in care of Ulmer Funeral Home. Online condolences can be made at www.ulmerfh.com Arrangements are under the direction of Ulmer Funeral Home.

The family of Russell Harmon created this Life Tributes page to make it easy to share your memories.