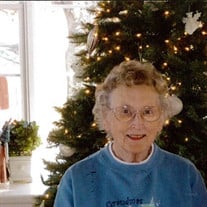 Ruth Ellen Dawald, 83, passed away Sunday, April 2, 2017 at Mercy Hospital in Joplin. Ruth was born August 9, 1933 in Carthage, Missouri to Frank E. Ford, Sr. and Ida May “Sigler” Ford. She was a lifetime resident of Carthage, a homemaker and was employed by Reed Engineering as their secretary. Ruth was a devoted member of Mount Moriah United Methodist Church in Carthage. She was a member of the University of Missouri Extension Club, a 4H Leader, taught Sunday school and was a youth group leader at her church. Ruth was united in marriage to Frank Dawald on October 4, 1953 at Mt. Moriah United Methodist Church in Carthage; he survives. Ruth is also survived by one son, Frank Richard Dawald and wife Terri of Carthage, one daughter, Sharon Frost and husband Randy of Carthage and four grandchildren: Peter Frost, Kelsey Frost, Jeffrey Dawald and Lauren Dawald. Ruth was preceded in death by her parents, one sister Marion Hensley Keyes and three brothers: Dave, Bill and Frank Ford, Jr. Services will be held at 2:00 p.m. Friday, April 7, 2017 at Ulmer Funeral Home. Visitation will be held from 6:00 p.m. to 7:00 p.m., Thursday, April 6, 2017 at Ulmer Funeral Home. Burial will be at Park Cemetery in Carthage. Contributions may be made to Mt. Moriah United Methodist Church in care of Ulmer Funeral Home to be used toward their building fund, youth program and Christmas lights. Arrangements are under the direction of Ulmer Funeral Home.

The family of Ruth Ellen Dawald created this Life Tributes page to make it easy to share your memories.